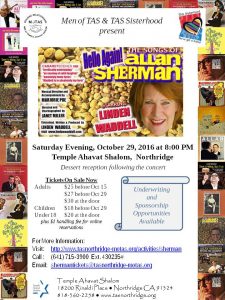 It started with Bruce Kimmel (FB). I had participated in the Kickstarter for Bruce’s revue “Los Angeles: Then and Now” at LACC. It was there I met  Linden Waddell (FB) and learned about her one-woman show, Hello Again! The Songs of Allan Sherman. I thought it would be a good fit for our congregation, Temple Ahavat Shalom (FB) in Northridge. After some back and forth, we ended up booking the show as a fundraiser for the Men of TAS (FB) and the TAS Sisterhood (FB). Thus began my second stint wearing the hat of a producer :-), similar to my ACSAC Experience.

Last night was the show, and now I can return to my traditional hat — one that fits better — that of a professional audience.  I’ll note that although I had booked Linden’s show based on the strength of her personality and my love of Allan Sherman‘s catalogue. I had actually not watched her You-Tube clip, so the show itself was a complete surprise … and a delight.

It wasn’t just me that loved the show. As the show was going on, I was watching the rest of the audience. Universal smiles. People singing along quietly. After the show, talking to the attendees, there was universal acclaim.  Although many of the younger generation have forgotten Allan Sherman, with their only exposure to parody being Weird Al, the generation in attendance grew up with these parodies, and it was a delight to hear them again. The live aspect added a lot to it — if you know about Allan Sherman, you know these songs were meant to be performed live — they started out as party parodies. It added something.

Linden’s show was not just a simple performance of songs. She brought characterizations and accents and stories to add to the songs, and provided history and context to the songs. It went over very well, and the audience interaction was a delight.

Linden adjusts the songs for the audiences; at our show, the playlist was as follows:

What’s nice is that there was  a mix of the familiar and unknown (and that unknown was Amazon’s gain, as I filled in the 6 albums I was missing). Songs that I hadn’t known — such as “Secret Code” or “All of My Laughter”, and it was amazing how many of these songs — from 60 years ago — were still relevant today. You can really see how artists like Weird Al owe there existence to artists like Allan Sherman.

About the only regret I have with the show is that the audience was not bigger. We tried our best to spread the word via social media and promotion, but it obviously didn’t reach the right demographic. This wasn’t the fault of the show — it was our learning curve on this aspect (and one I think many groups need to learn — from my conference experience, publicity is one of the hardest jobs there is and one that often gets left to those without the connections to do it right). A number of attendees expressed interest after the show in booking it for groups they know — I think that is a wonderful testament to the universality combined with nostalgia of this music. Still, I’d estimate we had nearly 100 at the show, which is pretty good attendance.

Linden was accompanied during the show by accompanist Marjorie Poe, who join in on a few songs.

Production credits: The show was directed by Janet Miller (FB), who alas was not in attendance (I enjoy seeing Janet). Linden is booked by Jeannine Frank / Frank Entertainment. On the Temple side, credit goes to the members of the Sherman Show committee: Jackie Zev, Jennifer Kassoy, Larry Hoffman, Roger Lowe, and lil ole me. Our sound was run by Andrew Petrak and Jacob Zonis, alumni of the Nobel Middle School Drama program. A special shout out to Aaron Solomon, the TAS Executive Director, who came over in the late afternoon to help us figure out how to get the connections right and the sound working perfectly. Thank you also to the spouses who helped (Karen Davis (my lovely wife) and Dorothy Hoffman), and all the kids and volunteers who helped usher and set up. A special thank you to our sponsors: Larry and Dorothy Hoffman, and Bernard and Tamara Singer.

If you remember Allan Sherman — and even if you only know Weird Al — I’d recommend you see this show. Alas, for us, it was a one-time event. Luckily, for you, you can check Linden’s website and find future showings.

Upcoming Shows:  November starts with another Valley Performing Arts Center (VPAC) (FB): Culture Clash’s Vote or Die Laughing. The following weekend brings Hedwig and the Angry Inch at  the Hollywood Pantages (FB) and the Nottingham Festival (FB). We then lose a weekend as we travel to Palo Alto for a Bar Mitzvah. The third weekend of November brings Funny Girl, a Conundrum Theatre Company (FB) guest production at  The Colony Theatre (FB) and a Day Out With Thomas at Orange Empire Railway Museum (FB) [excuse me, “Southern California Railway Museum”]. November concludes with a HOLD date for Little Women at the Chance Theatre (FB) in Anaheim. The last month of the year will include Into the Woods at Nobel Middle School, the CSUN Jazz Band at the Annual Computer Security Applications Conference (ACSAC), Amalie at the Ahmanson Theatre (FB), The King and I at the Hollywood Pantages (FB); an unspecified movie on Christmas day; and a return to our New Years Eve Gaming Party.

Turning to 2017, January currently is quiet, with just a single hold date for Zanna Don’t at the Chromolume Theatre (FB). February 2017 gets back to being busy: with a hold for Zoot Suit at the Mark Taper Forum (FB) the first weekend. The second weekend brings 33 Variations at Actors Co-op (FB). The third weekend has a hold for the WGI Winter Regionals. The last weekend in February brings Finding Neverland at the Hollywood Pantages (FB). March quiets down a bit — at least as currently scheduled — with Fun Home at the Ahmanson Theatre (FB) at the beginning of the month, and An American in Paris at the Hollywood Pantages (FB) at the end of the month.

As always, I’m keeping my eyes open for interesting productions mentioned on sites such as Bitter-Lemons, Musicals in LA, @ This Stage, Footlights, as well as productions I see on Goldstar, LA Stage Tix, Plays411 or that are sent to me by publicists or the venues themselves. Note: Although we can’t make it, I also recommend the 10th Anniversary Production of The Brain from Planet X at LACC. Lastly, want to know how to attend lots of live stuff affordably? Take a look at my post on How to attend Live Theatre on a Budget.