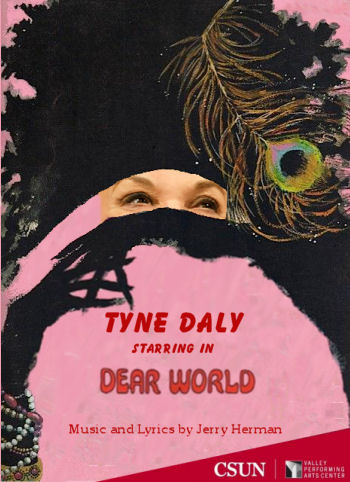 When Dear World debuted in 1969, to put it bluntly, it flopped. It came on the heels of Hello Dolly! and Mame, but ran only 177 performances. Based on Jean Giraudoux‘s play The Madwoman of Chaillot as adapted by Maurice Valency, it starred Angela Lansbury as the Countess Aurelia. Although Lansbury won a Tony Award for her performance, there were many problems. Most critics blame the fact that this was a chamber-piece blown up for a large Broadway house. Others cited problems with the books, and some articles I’ve read cited the banality of some of the lyrics. There have been attempts to update the show — most notably at Goodspeed in the early 2000s — but they haven’t gone anywhere. Last night’s performance was not a formal production of the show — there were no sets or costumes, no choreography. It was a concert performance: actors on-book at music stands performing, with a narrator to set the scene. By doing so, it allowed the audience to focus on the score and the story. The version presented appeared to be the revised Goodspeed version, which started from the original book by Jerome Lawrence and Robert E. Lee, with subsequent adaptations by David Thompson. This version reordered the songs slightly, and added two songs that were not on the original cast recording from 1969.

The basic structure on Dear World is one common to musicals from the 1960s: there is a basic main story, and a background love story (because there always needs to be a love story). The basic main story, as modified slightly from the original, concerns a bunch of greedy rich corporate presidents discovering oil under a cafe in Paris, and the Countess and her mad friends hatching a plot to prevent them from destroying Paris to get the oil. The love plot concerns the relationship between a waitress at the cafe and the son of one of the corporate presidents. At bit fanciful and farfetched, one could imagine it falling with a thud in 1969 because of the lack of the concern at that time about either the supply of oil or corporate greed. We hadn’t even had the first Earth Day yet. There was no connection with the plot at all.

Today, on the other hand, the basic plot is much more relevant. We have seen what men will go through to get their oil and gas — especially just up the hill in Porter Ranch, for example. We have seen how corporate greed can destroy. Speaking of corporate greed, in fact, we have a candidate for President who is the poster child for corporate greed and unbridled wealth. One of the songs added to the second act, “Have a Little Pity on the Rich” (performed excellently by Steven Weber (TW)), could easily be sung by Donald Trump, as a man who isn’t attracted to wealth — wealth is attracted to him:

If I throw a diamond in the Seine
It comes up in the trout I had for dinner.
If I bet a bundle on a mare with rickets
Well, the mare becomes a winner.
If I throw a franc away
Or give a bank away
Or drop my assets in a ditch
The more that its money to burn for me
The faster profits return to me
So have a little pity on the rich.
(“Have a Little Pity on the Rich“, M/L: Jerry Herman)

His opposition is a determined woman, a woman who many think of as crazy, but might be the most sane out there. Her core belief is captured in the simple song “One Person”:

C’mon, in this era of Bernie Sanders, who can’t hear that as a battle cry.

We have the potential, yes. However, I don’t think the Goodspeed revisions quite get one there. The characters are a little too comic, a little too caricatured.  The underlying love story feels grafted on, an afterthought, something not integral to the story. The madness of the Countess and her friends seems out of place today. It is as if the book writers never were quite sure what they wanted the story to be: allegorical farce or a pointed message piece. Could this piece succeed? Yes, given the right attention, the right reworked book, and some reworking / restructuring of some of the songs.

Yes, some of the great Herman songs need reworking, simply because of their banality. The title song is a great example:

There is the potential for a great musical here. It is no longer critical. But it still needs some medicine.

Luckily, in a concert version you can set all of that aside and listen to the music. It’s one night, so you don’t need to worry about whether the book works long term. You can assemble a team of great performers, a wonderful orchestra, and sit back and enjoy. This is what VPAC did.

Stepping into the shoes of Angela Lansbury (who was perhaps too young for the part back in 1969) was Tyne Daly (FB) — who fit the part great. She brought a unique characterization to a performance that minimally required her to sing, and in doing so brought the Countess to life. She handled her numbers well, in particularly her main numbers of “I Don’t Want To Know”, and “One Person” quite well.

Supporting Lansbury as the other countesses were Vicki Lewis (FB) as Madame Constance and Bets Malone (FB) as Madame Gabrielle. They played off each other well, and were great in the tri-parte “The Tea Party”.

The evil side of the equation was represented by the three corporate presidents — E.E. Bell (FB) [President One], Michael Shepperd (FB) [President Two], and James Leo Ryan (FB) [President Three] — and the Prospector who discovered the oil, Damon Kirsche (FB). This group was strong — especially Bell and Kirsche. Shepperd needed to be closer to the microphone; his voice (which was good) was not always picked up and amplified equally to the others. They did appear to be having great fun with the roles.

The love interests were represented by Nina (Brandi Burkhardt (FB)), a waitress at the Cafe, and Julian (Zachary Ford (FB)), the son of one of the corporate presidents. Both had wonderful singing voices and made a cute couple, and as their characters worked well in the story. The love part of the story for them, however, just felt grafted on and didn’t fit well — seemingly just there so some ballads could be sung. They were sung beautifully, but still….

Standing out in a spectacular fasion was Steven Weber (TW)’s Sewer Man. Weber does evil and eccentric so well. He sang strongly, actually danced, and was just a delight to watch.

Rounding out the cast were Jane Leeves (FB) as the Narrator, and Sean Smith (FB) as the Sergeant. The main performers were supported by the Acasola (FB) ensemble from CSUN — CSUN’s first A-cappella Group.

On the creative and production side, Zack Leuchars (FB) did the lighting design, and Nick Oldham did the sound design. Both were good, although there were a few sound problems. Orchestrations were the original orchestrations by Phillip J. Lang, except for a few songs orchestrated by Darryl Archibald (FB). Casting was by Amy Lieberman. The production was directed by David Lee (FB), and produced by Suzi Dietz (who we remember from her Pasadena Playhouse days).

This was a one-time only performance at the Valley Performing Arts Center (VPAC) (FB). It was part of the Scenes and Sounds series at VPAC, to which you can still subscribe.

Upcoming Shows:  Today brings an open-house at the Hollywood Pantages (FB), followed by Our Town at Actors Co-op (FB) this evening… and then it is the start of the High Holy Days. The second weekend has another Valley Performing Arts Center (VPAC) (FB) event: this time for Jazz at Lincoln Center Orchestra with Wynton Marsalis. The third weekend has yet another VPAC event: An Evening with Kelli O’Hara on Friday, as well as tickets for Evita at Cabrillo Music Theatre (FB) on Saturday. The following weekend brings Turn of the Screw at Actors Co-op (FB) on October 22 and the new Tumbleweed Festival (FB) on October 23. The last weekend of October brings Linden Waddell’s Hello Again, The Songs of Allen Sherman at Temple Ahavat Shalom (a joint fundraiser for MoTAS and Sisterhood).

Interrupting this recap for a word from a sponsor: Linden Waddell’s Hello Again, The Songs of Allen Sherman at Temple Ahavat Shalom is open to the community, and is a joint fundraiser for MoTAS and Sisterhood. Please tell your friends about it. I’m Past President of MoTAS, and I really want this to be a success. Click on the flyer to the right for more information. It should be a really funny night.

Oh, and if that wasn’t enough, October is also the North Hollywood Fringe Festival (FB), although I doubt if we’ll have time for any shows. November will bring Hedwig and the Angry Inch at  the Hollywood Pantages (FB); a Day Out With Thomas at Orange Empire Railway Museum (FB) [excuse me, “Southern California Railway Museum”]; the Nottingham Festival (FB); and possibly Little Women at the Chance Theatre (FB) in Anaheim. We still have some open weekends in there I may book. We close out the year, in December, with the CSUN Jazz Band at the Annual Computer Security Applications Conference (ACSAC), Amalie at the Ahmanson Theatre (FB), The King and I at the Hollywood Pantages (FB); an unspecified movie on Christmas day; and a return to our New Years Eve Gaming Party.

As always, I’m keeping my eyes open for interesting productions mentioned on sites such as Bitter-Lemons, Musicals in LA, @ This Stage, Footlights, as well as productions I see on Goldstar, LA Stage Tix, Plays411 or that are sent to me by publicists or the venues themselves. Note: Although we can’t make it, I also recommend the 10th Anniversary Production of The Brain from Planet X at LACC. See here for the Indiegogo. Lastly, want to know how to attend lots of live stuff affordably? Take a look at my post on How to attend Live Theatre on a Budget.