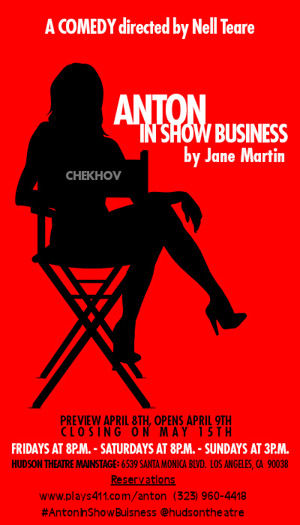 Back in mid-March, I received a very interesting press release about the forthcoming play “Anton in Show Business” (now running at the Hudson Mainstage (FB) through May 15th). The release (or some article I saw on the show) noted that a unique fact about this production was its all female production team: writer, director, producer, cast, creatives. Everyone except the guy who built the set was female. Given all the recent talk about diversity (both in the theatre, such as the Producers Perspective with Lynn Ahrens, or elsewhere, such as in the recent excellent episodes of both Startup and of Reply All), and the importance of having women (and minorities) both on-stage and in the creative and production positions — this was (alas) noteworthy.

Alas, the one possible weekend I could see the show was already booked. But then that changed. As a result, Sunday afternoon saw us in Hollywood for the all female Anton in Show Business, written by Jane Martin and directed by Nell Teare (FB).

Anton in Show Business tells the story of two New York actresses and one Hollywood star recruited to star in a production of Anton Chekhov’s Three Sisters in San Antonio, Texas. Along the way (i.e., as the story is told), theatrical conventions are skewered, the industry is criticized in many ways, comments are made about the power of critics, realities are exhibited about the power of producers… and of their “name” stars, and in general the curtain is pulled back to expose what theatre is really like (well, at least what the mysterious Jane Martin wants you to think theatre is really like — I wouldn’t know, being a cybersecurity guy).

This is all done on a very simple set: chairs, beds, tables, and that’s about it. The entire sense of story comes through costuming and the wonderful performance of the various characters.  The character who keeps things moving along is the stage manager, T-Anne. She introduces the sense of place, provides the interstitials when place changes or there is information of side significance. Also providing commentary are the three actresses — the Hollywood star Holly, the long-suffering off-Broadway actress Casey, and the newbie Lisabette. In many ways, the behavior of these three provides an echo of their counterparts in Three Sisters, Masha, Olga, and Irina. Additional commentary is provided by an “audience” member, Joby, who is also a critic.

Given the simplistic set, direction is key. Luckily, Nell Teare (FB)’s direction is spot-on, making these characters believable and amplifying the chemistry between the actresses. One would almost think she understood the commentary being made about the theatre personally.

In the lead positions were Gillian Shure (FB) as Holly, Anzu Lawson (FB) as Casey, and Dana Pollak (FB) as Lisabette. All three were a delight. Shure’s Holly projected a wonderful sense of self-importance and confidence that befit her character. She was also able to show the underlying vulnerability within her facade of bravada. Lawson’s Casey had that wonderful sense of “been there, done that”, which was appropriate for a character of her experience and lack of significant advancement. Lastly, there was Pollak’s ever cheerful Lisabette who was just a joy to watch.

Supporting these folks were a number of talented actresses who got to portray multiple characters. Courtney Sauls (FB) was not only the aforementioned stage manager T-Anne, but also Andwyneth (the Female African American Artistic Director of the San Antonio Black Rage Ensemble) as well as Don Blount (the Male VP of Tobacco Co, the corporate sponsor). Sauls was wonderful in all the roles, but I particularly enjoyed her stage manager and her single scene as Andwyneth. Just hilarious. Claudia de Vasco (FB) was Ralph (the arrogant gay British stage director), Wikewitch Konalkvis (the male Polish stage director), and Joe Bob (the Chairman of the Board of the San Antonio Black Rage Ensemble). de Vasco’s Ralph did a wonderful job of capturing the arrogance of British directors, as well as the overblown sense of importance of the Polish director. Lastly, Marguerite Insolia (FB) was Kate (the producer of the San Antonio Three Sisters), as well as Ben (a San Antonio actor and cowboy singer playing Vershinin), and Jackey (a gay male costume designer). We saw Insolia mostly in the role of Kate, where she had just the right sense of exasperation at the proceedings and her loss of control. She was also strong as Ben in her interactions with Shure’s Holly. Jesse Madera (FB) was Joby, the audience member and critic.

Katie Hall  (FB) was the understudy in the cast so we didn’t see her. Although the main cast was great, it would have been nice to see her as she was a REP East alumna.

Turning to the production and creative side: The production design was by Isabella Mack (FB), and was relatively simple in terms of set construction. No specific credit is given for costume design, so presumably Mack took care of that as well. The costumes were very good, especially the one for Andwyneth. Mack also handled the lighting design. No credits were provided for sound design, however Ashley Clark (FB) (whom we know from the Nigerian Spam Scam Scam (FB) team) was there. Ashley has handled those functions in other shows, so she might have been doing that here as well. Set construction was by the token male Aaron Lyons (FB). Sandra Kuker (FB) handled publicity. Lara Myrene (FB) was the real stage manager. Anton in Show Business was produced by Gillian Shure (FB) (which has greater significance, as the program notes this was under AEA’s Self Producing Plan (as opposed to the 99-Seat agreement that the #pro99 group is working to keep in a modified form).

Upcoming Shows: The last weekend of April will be the Four Clowns (FB) production of Lunatics and Actors at the LA Shakespeare Center on April 30. May starts with Endgame at the Kirk Douglas Theatre (FB). We then run off to the Bay Area for our daughter’s graduation from Berkeley. While there, we are seeing the Landmark Musical Theatre (FB)’s West Coast Regional Premiere of The Boy from Oz (but pay no attention to that production behind the curtain at the Celebration Theatre (FB) — if they start the same day, they are simultaneous premieres and both have equal bragging rights). We will also be seeing The Last 5 Years at San Francisco’s American Conservatory Theatre (A.C.T.) (FB).  May 21 has a HOLD for Los Angeles: Then and Now, a new musical at LA City College (FB) from Bruce Kimmel. The last weekend of May has HOLDs for the MoTAS Outing to the Jethawks, and for I Only Have Eyes for You at the Ricardo Montalbán Theatre (FB). As for June? It’s the Hollywood Fringe Festival (FB), and I’ve started to hold dates for the following shows: Alien vs. Musical ✨ All Aboard the Marriage Hearse ✨ All The Best Killers are Librarians ✨ Code 197 DWB (Driving While Blewish) ✨ Qaddafi’s Cook — Living in Hell, Cooking for the Devil ✨ Squeeze My Cans ✨Tell Me On A Sunday  ✨ Toxic Avenger: The Musical  ✨  Vintage Box ✨ Einstein ✨Titus Andronicus Jr. ✨The Old Woman ✨Sweet Love Adieu ✨ My Big Fat Blond Musical✨Doctor in the House ✨ Hamlet (Las Vegas Style) ✨. But that’s just a small percentage; there are over 240 shows listed now.  We thought about Love The Body Positive, but then again… no. Can’t be scaring people.  July brings us back to conventional theatre, with Beautiful at the  Hollywood Pantages (FB) and the Western Corps Connection (FB) the first weekend, a HOLD for Grey Gardens at the Ahmanson Theatre (FB) the second weekend, The Little Mermaid at  Cabrillo Music Theatre (FB)  the third weekend, a HOLD for Weird Al Yankovic at the Hollywood Bowl (FB) and Operaworks (FB) Opera Re-Constructed at CSUN the fourth weekend, a mid-week Hollywood Bowl (FB) concert of Wynton Marsalis and Aaron Copeland, and a HOLD for Armadillo Necktie at The Group Rep (FB) the last weekend.  As always, I’m keeping my eyes open for interesting productions mentioned on sites such as Bitter-Lemons, and Musicals in LA, as well as productions I see on Goldstar, LA Stage Tix, Plays411 or that are sent to me by publicists or the venues themselves.