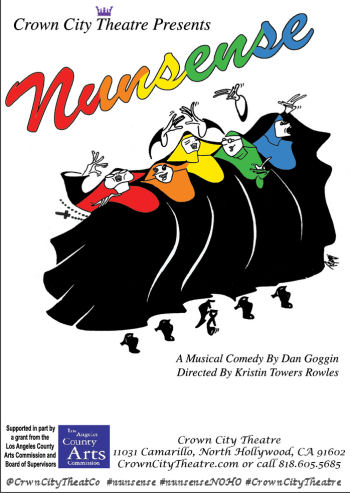 Especially when contrasted to movies, sequels in the live theatre business are extremely rare. In general, for theatre, sequels flop. Just look at Annie 2, Bring Back Birdie, The Best Little Whorehouse Goes Public, or Love Never Dies. When you move to the arena of Off-Broadway (i.e., smaller size houses), sequels and series fare better. There are, of course, the Holiday spinoffs (e.g., Plaid Tidings, Winter Wonderettes). There are a few live theatre tentpole seriess: the Forbidden Broadway series, the Don’t Hug Me series, and the extremely popular Nunsense series (which is just about to launch a streaming TV series), written by Dan Goggin.

I’ve known about the Nunsense series for years, having many of the cast albums in my collections. However, I’ve never actually seen a Nunsense in the wild. That is, until last night.  When I learned that Crown City Theatre (FB) was doing Nunsense as their holiday show, the ticket watch started. We ended up ticketing for this weekend, and so we were blessed with Nunsense as our final live theater show of 2015. I’m pleased to say that this production lived up to the excellent quality standard we’ve seen from Crown City. More on that in a paragraph or two.

So what is Nunsense about? The elevator pitch explanation is, to put it bluntly, “Singing and dancing nuns. What could be funnier?” Well, forget those nuns in The Sound of Music. Those are not the nuns that you are looking for. For which you are looking. Oh, never mind.

Here’s a longer summary from the Nunsense website: Nunsense begins when the Little Sisters of Hoboken discover that their cook, Sister Julia, Child of God, has accidentally poisoned 52 of the sisters, and they are in dire need of funds for the burials. The sisters decide that the best way to raise the money is to put on a variety show, so they take over the school auditorium, which is currently set up for the eighth grade production of “Grease.” Here we meet Reverend Mother Regina, a former circus performer; Sister Mary Hubert, the Mistress of Novices; a streetwise nun from Brooklyn named Sister Robert Anne; Sister Mary Leo, a novice who is a wannabe ballerina; and the delightfully wacky Sister Mary Amnesia, the nun who lost her memory when a crucifix fell on her head.

Or, as I said, “Singing and dancing nuns. What could be funnier?”  This is not high concept theater, folks.

Luckily, funny it is. Under the direction of Kristen Towers Rowles (FB), these nuns have fun, let loose, and generally ham it up (which they can do, because they do not keep kosher). The sense is playful from beginning to end, and I even got the sense that there was some level of improvisation (at least in how some bits were done).

The performances … at least the ones we saw … were excellent. I add that caveat because there are swings for every role; at our performance we had the swing for Sister Mary Hubert. Thus, I cannot speak to the folks we didn’t see, but given the playfulness of this bunch, I’d expect them to be great.

As Sister Mary Regina, Mother Superior, we had Michelle Holmes (FB) [Swing: Karen Christie (FB)]. Holmes seemed to be having a lot of fun with the role, as could be seen in the Unexpected Discovery scene near the end of Act I, the “Just a Coupl’a Sisters” song, and in particular, the “Baking with the BVM” scene. About my only comment on her performance is easily correctable: there are a number of lines in the script that imply that the Mother Superior is a bit more on the hefty size, or at minimum, has a hefty rump. However, Holmes is relatively skinny — which made those lines incongruous. Some slight adaptation to the script would solve the problem.

At our performance, Sister Mary Hubert was played by Elizabeth Jane Charlton/FB, the swing [Normally: Renee Cohen (FB)]. I really liked Charlton’s Hubert. I’m sure part of this is that she fit my mind’s image of Hubert, for some reason. She had a very good singing voice, which manifested itself in her number “Holier Than Thou” much more than in her other numbers. She was fun to watch.

Sister Robert Anne was portrayed by Lisa Dyson (FB) [Swing: Kristin Farrell (FB)]. Dyson gave off an appropriate New Yawk street smart vibe, which worked well. She did very well in her number “I Just Want to Be a Star”.

Kelly Dorney (FB)’s Sister Mary Amnesia gave one of my two favorite performances in the show (Swing: Amanda Walter (FB)). She brought a wonderful playfulness to the role, and an even more remarkable singing voice. I was just blown away by her singing. Wow. Umm, where was I. Oh yes. It is hard to pick a favorite performance of hers, but I really liked her “I Could’ve Gone to Nashville” number, but “So You Want To Be A Nun” comes a close second.

My other favorite performance was Shayna Gabrielle (FB) as Sister Mary Leo (Swing: Alix Isom (FB)). Gabrielle was just mischevious, especially later on where you could see she was getting into the overall humor and starting to crack up at the antics of the other performers. Her comic dance in “Soup’s On” was just spectacular. I just couldn’t keep my eyes off of her.

The movement of the nuns was choreographed by Lisaun Wittingham (FB), assisted by Michael Marchak (FB). In general, the dances worked well. Particularly notable was “Tackle That Temptation with a Time Step” and the aforementioned “Soup’s On”.

Music Direction, arrangement, and performance was by William A. Reilly (FB).

Turning to the production side. The program states that the set and prop design was by the Eighth Grade Class at the Mount Saint Helen School, but I truly doubt that. I’m guessing it was done by the dedicated folks at Crown City. Of course, this show doesn’t really need that much of a set, and the primary prop is Sister Mary Annette. Costume design was by Tanya Apuya (FB), and they looked suitably nun-like to this Jew. Lighting Design was by Zad Potter (FB), who also served as Production Stage Manager.  Lighting is an interesting challenge at Crown City, as there is no space for a traditional spot and use of a moving mirror is required. This worked reasonably well, although there was some flicker either coming from either the spot or the floor lighting. Remaining production credits: Sound design: Joe Shea (FB); Projection/Video Design: Chris Thume/FB; House Technical Manager: Michael Pammit/FB.

Upcoming Shows: This was our last live theater show for 2015. Next up is “year in review” writeup. The new year, 2016, starts with “Louis and Keeley – Live at the Sahara” at The Geffen Playhouse (FB) on January 2nd. This is followed by “Bullets Over Broadway” at the Pantages (FB) on January 9; “That Lovin’ Feelin’” at The Group Rep (FB) on January 16; “Stomp” at the Valley Performing Arts Center (VPAC) (FB)  on January 24; and “A Funny Thing Happened on the Way to the Forum” at Cabrillo Music Theatre (FB) on January 30. There is also the open question of whether there will be Repertory East Playhouse (“the REP”) (FB) 2016 season, and when it will start.  However, given there has been no announcement, I feel safe booking all weekends in January  (I’ll note that if there is no REP season, I’ll likely subscribe at Group Rep — call it the Law of Conservation of REP). February starts with a hold date for “An Act of God” at the Ahmanson Theatre (FB). The rest of the February schedule is empty except for February 28, when we are seeing The Band of the Royal Marines and the Pipes, Drums, and Highland Dancers of the Scots Guards at the Valley Performing Arts Center (VPAC) (FB). March brings “Another Roll of the Dice” at The Colony Theatre (FB), and has two potential dates on hold for “A Gentleman’s Guide to Love and Murder” at the Ahmanson Theatre (FB) (pending Hottix). I expect to be filling out February as December goes on.  As always, I’m keeping my eyes open for interesting productions mentioned on sites such as Bitter-Lemons, and Musicals in LA, as well as productions I see on Goldstar, LA Stage Tix, Plays411 or that are sent to me by publicists or the venues themselves.