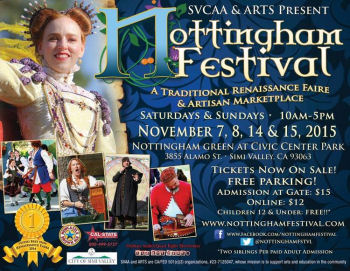 This weekend, instead of going to the theatre, we went to a form of living theatre: the Nottingham Festival (FB). Nottingham is a new “old-style” Ren Faire, now in its third year. The main people behind Nottingham (other than the Kickstarter supporters, a group of which we are a member) are Jan Glasband (FB) and the good folks at Actors Rep Theatre of Simi (Simi ARTS) (FB); these are the same folks behind the excellent production of Addams Family that we saw last week. As charter supporters, we’ve been every year; this year was in a slightly larger space, and the faire has expanded to two weekends.

Those familiar with the history of RenFaire know how Faire started: In Southern California, in the hills of Agoura between Los Angeles and Ventura County. It was run by the non-profit Living History Center, and had a traditional feel. Over the years it moved and grew, going first to Paramount Ranch, then Devore, then the current location as San Gabriel Dam. “Southern”, as the Faire was styled, was run by a for-profit organization. Held in April and May, it is often hot and dry, vastly overcrowded, and at times has a very commercial feel. It is still fun to go to, but for those who attended Faire in its earliest days — it’s not the same thing. I was at Faire in Agoura a few times, going with folks from the UCLA Computer Club. My vague recollections are of a much simpler country faire, not the continual walking back and forth and the hoards of people that Faire entails these days.

I’m pleased to say that Nottingham has recaptured that old Faire feeling. I was noticing it today: a much more relaxed feeling, a lot more history, and a lot fewer outrageous costumes. My wife and I were even complemented on our garb, accumulated over the years. That has never happened before. It is friendlier. I noticed that we felt freer to sit and watch some shows: we saw some speeches by Niccolo Machiavelli (portrayed by Frank Dantona) and William Shakespeare (portrayed by Dan Will McCann (FB)*) at the Master’s Pavillion, the Merry Wives of Windsor at the John Barleycorn Stage, and Shakespeare doing a workshop of Hamlet on the Gloriana stage.
(* who I think is different than the Daniel McCann we saw many years ago at REP in The Graduate)

It’s not just me who feels this way. I was talking to a friend of mine from computer club days, who has been involved with Faire since Agoura. He commented on how this Faire was different than “Southern”: audiences tended to be appreciative and stay for entire shows. Additionally, Faire Management actually appreciated the performers and were grateful they were there (where as at “Southern” they were treated as employees, potentially out to abuse the system).

That’s not to say Nottingham is perfect yet. This year the main problem was liquid based: although there was wonderful ales, meads, and ports, and bottled water (at $4 per, with no refilling stations), and a few bottled sodas, that was it. There was no coffee, no tea, and no options other than water for those avoiding alcohol and HFCS/artificial sugar. I’m a big proponent of providing refilling stations, and given that numerous mugs and goblets are available, having a “fill your container for $2” would keep people hydrated, reduce plastic waste, and actually waste less water. Similarly, having coffee, tea, and iced tea (and perhaps chai) could be put into people’s containers and not push excessive sugar and booze. Some picnic tables would also be nice, and a slightly wider variety of food vendors would be great.

Those are all things that can be fixed next year, or perhaps even next weekend. I heartily recommend Nottingham Festival to anyone who loves Ren Faire as it used to be, back in the early days. You can still go to “Southern” when it comes around in April, but Nottingham is becoming a wonderful pre-Thanksgiving traditional in LA/Ventura Counties.

I look forward to further improvement in 2016. Huzzah!