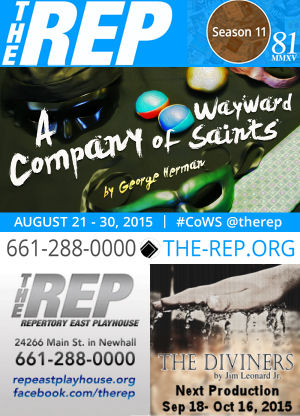 Commedia dell’arte is a particular artform with which I only have passing acquaintance; “passing” in this case meaning I’ve seen a high-school production of Scapino and heard the music of The Glorious Ones. However, I’ve never really understood the traditions or characters until a few nights ago when I saw the REP East Playhouse (FB) production of “A Company of Wayward Saints” by George Herman. So why did we go see it? First and foremost, because a friend (J. T. Centonze (FB)) was producing and directing the show; second, because we like the quality of REP shows; third, because my wife wanted to see it and we had that weekend open due to an upcoming trip. What did we think? Let’s put it this way: I’m very glad we went.

Commedia dell’arte is a 16th century Italian artform based on improvised performances utilizing particular character types. Originally, it was called commedia all’improviso. Performers played on outside, temporary stages, and relied on various props in place of extensive scenery. The better troupes were patronized by nobility. Characters typically wear masks, and fit a variety of stock characters, such as: The Harlequin (a clown); Scapino (the youth / acrobat / jack-of-all-trades); Pantalone ( the old man / money ); Il Dottore (the doctor / erudite); Il Capitano ( the captain / military man); the Innamorati, Tristano and Isabella (the lovers); Columbina (Harlequin’s mistress / the nag / impudent servant ); or Ruffiana ( tart / former prostitute). Other stock characters commonly found are listed / linked in the Wikipedia article.

I mentioned the particular character types above because A Company of Wayward Saints is the story of a commedia dell’arte troupe, La Compagnia dei Santi Ostinati (The Company of Wayward Saints) consisting of the above players. This troupe  is out on tour (no specific location, but it seems oddly to be somewhere in the midwest) and have started fighting with each other and becoming unprofessional. So unprofessional, in fact, that when the 8:30 PM curtain comes around, only Scapino and Columbina are there attempting to improvise and delay until the rest arrive. Harlequin, and shortly the rest of the troupe soon show up, and Harlequin informs the company that he has found a patron that is willing to pay their way home… on one condition. This patron, an unnamed Duke, has requested that they improvise on the theme of…. “The Story of Man”. If they do this, and they entertain him, he will fund their way back home. This is the set-up, and includes an introduction by Harlequin (the manager of the troupe) of the various characters in the troupe.

The remainder of the first act consists of the troupe’s first attempt to tell the history of man. They do this by attempting to do a variety of silly scenes illustrating human history: The Fall of Adam; Odysseus’ return to Penelope; the assassination of Julius Caesar. All fail miserably as the troupe keeps veering away from the point of each story, moving instead to illustrate failures such as arrogance, battles between the sexes, and much more. The actors upstage each other, end up infighting, and revert to being selfish children.  The act ends with the troupe members all walking out, leaving Harlequin to beg the audience to take a few minutes for themselves while he regroups the troupe, demoralized because they have “lost the art”.

The second act begins with Harlequin explaining that he couldn’t get the troupe back, but then they slowly all come back — having realized that their friendships and relationships were too strong. One character then gets the bright idea that the history of man need not be a literal history, but rather the history of the life of a man: birth, adolescent, marriage, death. The troupe then starts to stage these scenes — but this time they are working together. The scenes reflect the reality and pain of life: the birth scene is told from the point of view of the husband unable to help his wife, but learning how a child can bring back love; the adolescence scene relates the story of two Mississippi youth forming a relationship out of their tomboyish playfulness; marriage, where a negotiation between a female marriage broker and a daughter-marrying father ends unexpectedly with their liaison), and death (a story in which a priest on death row convinces his prosecuting soldier to take over for him). Out of these scenes comes the humor borne of reality and pain (as opposed to the heavy slapstick). This pleases the Duke and he agrees to fund their way home… but the troupe, having refound their art, decides to keep performing. At the end, Harlequin turns to the audience and requests them to single out no one player for your praise: showing that the selfishness of the first act has been abandoned.

As I indicated at the start, I was unfamiliar with this story and the characters that were portrayed. I was unsure as the act started, but ended the play touched and enjoying it quite a bit. The notion of a troupe rediscovering their art after a period of discord was a lovely and touching one. I can see why this play has had the longevity it has had (while researching this writeup, I even found a reference to when The Colony Theatre did the show, with John Larroquette as Harlequin). I found the story well worth seeing.

Although I could attempt to follow Harlequin’s dictum and not single out a particular player, I’d fail miserably. So let’s look at all the players equally instead. As Harlequin, Kevin Becker (FB) (who we saw just last week as Pontius Pilate) was wonderful and playful, capturing the clown well. He demonstrated his strong performance skills over both roles. Scapino was performed by Beth Ann Sweezer (FB), another REP regular, capturing the playfulness of the youth quite well … extremely fun to watch, both in the opening scenes, as the snake, and as the youth in the adolescence scene. Pantelone was Ryan Shrewsbury (FB), seen in REP’s Avenue Q, who captured the old man well (and was wonderful in the marriage negotiations). Dottore was  Stefanie Harbeson (FB), who was extremely touching in her discussions in the birth scene. Capitano was played with full bluster by Jay Potter/FB, appropriately stuffed in the Odysseus scene, but nicely down-to-earth in the death scene. The lovers were Benjamin Patrick Thomas (FB) [Tristano] and Kelly Boardman (FB) [Isabella], and seemed a well matched couple, both comically in the Adam and Eve scene, and touchingly in the birth scene. I’ll note that we just saw Thomas as Jesus in the REP’s Jesus Christ Superstar, and he looked totally different here. Columbine, the nag, was portrayed by Kim Iosue/FB with appropriate energy and shrewishness, and worked quite well in the marriage scene with Pantelone. Lastly, Ruffiana (the tart) was played by Marie-Clarie Erdynast/FB. I’ll note that I’ve known MC for years at REP, and I didn’t even recognize her in this role. A wonderful performance, especially in the adolescence scene.

As befits commedia dell’arte, the scenic design was minimal (and uncredited): the back of some flats left over from previous shows (with appropriate graffiti), some chairs, and such. It worked. The lighting design was by Jeffrey Hampton, and had a few points where actors were in the dark as they moved into the appropriate spot space (hopefully this will be fixed in the second week). Hampton also served as Stage Manager. Fight choreography was by Jesus, ooops, Benjamin Patrick Thomas (FB) and was suitably realistic. Music was by Ryan Shrewsbury (FB). The sound design was by the everpresent Steven “Nanook” Burkholder/FB. The production was produced and directed by J. T. Centonze (FB). Alas, we’ll be seeing J.T. a lot less at the REP: he just got the keys, and will soon be opening, Off Kilter Kilts (FB) in Pasadena.

A Company of Wayward Saints has one more weekend at REP East Playhouse (FB). You can get tickets online at the REP Online Box Office; note that this homegrown system will soon be replaced by a spiffy new Vendini system. Discount tickets are available on Goldstar.  You can also find special discounts by liking REP East on Facebook.

Upcoming Shows: This coming weekend sees a vacation show:  Evita at the Maui Cultural Center (FB), starring Hawai’i’s top-selling female vocalist of all time, Amy Hānaialiʻi Gilliom. September starts with Tom Paxton’s last concert at McCabes (FB) on September 12, followed by “The Diviners” at REP East (FB) and “First Date” at The La Mirada Theatre for the Performing Arts (FB). October will bring another Fringe Festival: the NoHo Fringe Festival (FB). October also has the following as ticketed or hold-the-dates: CSUN’s Urinetown (end of October – 10/30 or 11/1);  “The Best of Enemies” at The Colony Theatre (FB) (Ticketed for Sat 10/10); and  “Damn Yankees” at Cabrillo Music Theatre (FB) (Ticketed for Sat 10/17). As always, I’m keeping my eyes open for interesting productions mentioned on sites such as Bitter-Lemons, and Musicals in LA, as well as productions I see on Goldstar, LA Stage Tix, Plays411.