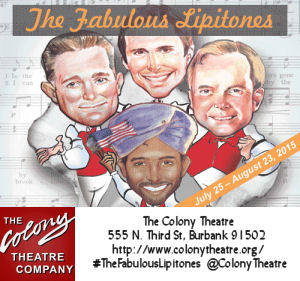 When you are talking about situational humor, you can never go wrong with a situation that involves an odd man out, or as they taught on Sesame Street: “Which one of these things is not like the other?” This is the premise of the current show, The Fabulous Lipitones,  at The Colony Theatre (FB), which we saw last night on a rescheduled ticket.

The Fabulous Lipitones (written by John Markus and Mark St. Germain) tells the story of a barbershop quartet in small town Ohio (London, Ohio). They had just finished qualifying for the nationals in Reno when their lead singer dropped dead of a heart attack (leading to the first joke of the show). The remaining members: Howard Dumphy (a home caretaker for his wife), Wally Smith (a pharmacist), and Phil Rizzardi (owner of an exercise and tanning studio) have to decide what to do: break up the group, or find a new lead. After some internal bickering about what direction they want to take the group now that their lead is gone, a fortunate call on speakerphone leads them to an employee of a nearby auto shop: Bob, who has a wonderful singing voice. When they ask him over to audition, they discover the truth: His full name is Baba Mati Singh, and he is a Sikh. As they say on the elevator, hilarity then ensues.

At this point, many stereotypes kick in. Bob has to explain the difference between Sikhism and Islam, while dealing with a group member who is a closet racist. The group is also dealing with the cultural differences between grey-haired pasty white men and a sikh from India. So insert all your “your a terrorist”, “it’s a ceremonial knife”, and such here.

But the thing about situation comedy — and the reason it has been so successful all these years — is that it is funny. It isn’t deep; it isn’t necessarily thought provoking. It is a pleasant way of passing a few hours with your fellow humans, laughing away at the funny situation. Don’t go looking for a classic farce; don’t go looking for a deep and sophisticated comedy. This is broad situation comedy, and it works. Who knows — as this is the California premier, maybe a TV executive will see this and decide to make a TV series out of it. It could be an improvement over many shows currently out there.

As usual with the Colony, the performances are top notch. John Racca (FB) plays Howard Dunphy. The interest aspect here is that Racca actually injured his leg after the first performance, and is walking with a cane. Although not part of the character conception, it fits the character well (even if it does mean he must exit stage left to go upstairs). Racca gives a very personable characterization of the character, including the wishy-washy nature of his decisions, and has a lovely voice. Steve Gunderson (FB) plays Wally Smith, a 60-something virginal druggist who really wants to keep the group together — giving the impression that this is his only outlet. Again, wonderful comic timing and singing voice. Dennis Holland plays Phil Rizzardi, the fitness buff of the group who really wants to walk away from Barbershop because it is so out of date. He’s also the racist of the group. Again, he has a great voice.

This brings us to the odd man out: Baba Mati Singh (Bob), played by Asante Gunewardena (FB). Asante plays the fish out of water well, and had the comic timing to hold his own against the old men. Again, a lovely singing voice — and more importantly, a singing voice that blended well with all the others to form a great Barbershop Quartet.

Additional voices credited in the program were provided by Larry Cedar (FB) and Kevin Symons (FB).

The production was directed by John Markus  (FB) (one of the authors). The direction worked well — the director not only knows the story well but how to direct sitcoms — and was designed to bring out the humor in the situations. What was interesting was how the direction had to adapt to the aforementioned actors’ injury.

In addition to a number of traditional barbershop numbers, there was original music by Randy Courts, with lyrics by Mark St. Germain. Musical direction was by Sam Kriger, with Choreography by Murphy Cross (FB).

The scenic design by David Potts was different than I’ve seen before for the Colony — a curtain in front of the main scenic area, with a few scenes played out before the curtain. It was clear that this production was written with a proscenium stage in mind and was adapted for thrust. Still, the scenic design itself worked well to establish place, especially when combined with the properties design and set dressing of Colony regular John McElveney (FB), and the scenic art of newly-engaged Colony regular Orlando de la Paz. The lighting design by Bill E. Kickbush worked well to establish the place and scene, and the sound design by Drew Dalzell (FB) was what a good sound design should be: unnoticable.  The costumes by Dianne K. Graebner (FB)  fit the characters well, although my wife had some potential considers about the Sikh costumes. Remaining production credits: Art Brickman (Production Stage Manager); Patricia Cullen (Casting Director); David Elzer/Demand PR (Public Relations). The Colony is under the artistic direction of Barbara Beckley.

Upcoming Shows: The rest of this weekend is concerts: our summer Mus-ique show on Saturday, and Concerts on the Green in Warner Park (with a Neil Diamond cover band) on Sunday. The third weekend of August is calmer, but only because we moved theatre off the weekend because my wife is driving my daughter’s car back to the bay area. As for me, I might very well go back to see the revised “Jesus Christ Superstar” at REP East (FB) — they are returning to have live music and I expect that will make a significant difference. The third week of August may see us back at REP East (FB) for their “secret seventh show”, which has been revealed to be “A Company of Wayward Saints“. After that we’ll need a vacation … but then again we might squeeze in Evita at the Maui Cultural Center (FB) the last weekend of August. September starts with Tom Paxton’s last concert at McCabes (FB) on September 12, followed by right now is mostly open, with the only ticketed show being “The Diviners” at REP East (FB) and a hold-the-date for “First Date” at The La Mirada Theatre for the Performing Arts (FB). October will bring another Fringe Festival: the NoHo Fringe Festival (FB). October also has the following as ticketed or hold-the-dates: CSUN’s Urinetown (end of October – 10/30 or 11/1);  “The Best of Enemies” at The Colony Theatre (FB) (Ticketed for Sat 10/10); and  “Damn Yankees” at Cabrillo Music Theatre (FB) (Ticketed for Sat 10/17). As always, I’m keeping my eyes open for interesting productions mentioned on sites such as Bitter-Lemons, and Musicals in LA, as well as productions I see on Goldstar, LA Stage Tix, Plays411.