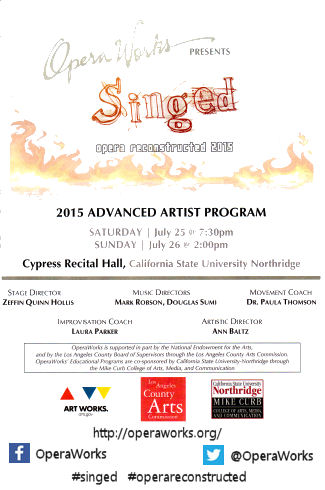 Every year we go to a fascinating show that is impossible to describe. The show is the finale of the Operaworks (FB) Advanced Artist Program called “Opera Reconstructed”. Here’s why this is so fascinating:

The Advanced Artist Program is for operatic performers in graduate school or beyond, who want to work in-depth on their repertoire – dramatically, musically, and physically. It’s goal is to teach the performers the “other” side of opera beyond singing. In particular, the not only learn how to address the business and marketing side, but they learn how to act and move on stage as actors and actresses — how to relate to other characters as characters, not just stand in front of a piano and sing. The program culminates with two performance shows of improvised opera. The show consists of three acts, not necessarily related. For each act, the students pick a location and come up with one paragraph bios of their characters and their relationship to the other characters in their act. They then pick arias, from both operas and other musical theatre, for each character to relate to another character. Improvising dialogue, they now put these characters and arias into a show. Here’s an example bio:

Brynne (Pulver), 42, was tragically murdered last year at her co-owned business, the speakeasy, Sassy Sally’s. She was the songstress for over fifteen years, and was a local favorite. A beloved mother, sister, and friend, she is survived by her daughter, Alexandra, and son-in-law Scott; her sister Johanna, and from what we are told, long-time lover Evelyn. Some say they still feel her presence in the speakeasy. Will she ever rest in peace?

If there is one constant in these shows, it is sex and violence. Perhaps this is because stronger emotions are easier to portray, to express. But the plots are convoluted (as one might expect from those familiar with opera), and remembering them a day after the fact can be difficult. It is also rare in these shows for a performer to sing more than one song — not a surprise when you have 32 performers and 32 songs in 2.5 hours.

This year the tree acts were only tangentially related: some characters from Act One reappeared in Act Three — even though it was almost 80 years later. Time discontinuity aside, that was really the only connection. Let’s look at the acts and the singers from what I remember.

Act One was called “The Speakeasy”, and took place in a 1920s speakeasy called Sassy Sally’s. Sally’s is run by Noelle (Thomson); she runs the establishment and interacts with all. Joanna (Watson) is the cigarette girl and assistant manager, and loves to daydream about her ex. Jaime (Billman) is coming off a messy divorce with Shelly (who reappears in Act Three). Evelyn (Tsen) was in love with Brynne (see above), and hasn’t been able to move on. But now she has feelings for Karen (Levandoski), a cop who was investigating the case.  Madelaine (M. Martinez) is the new songstress, and wants to end her days as a high-end prostitute. Maggie (Woolums) is a prep school graduate who was friends with Alexandra and Elena. Scott (Ballantine) was a guard at the state prison (which we see in the next act) and comes to the speakeasy after work. Alexandra (A. Martinez) is in a tumultuous marriage with Scott, and is also a bootlegger. Elena (Bird) has resorted to exotic dancing to support her drinking problem. Cole Perder (Douglas Sumi) was the speakeasy pianist, playing piano to fund his addiction.

To me, the most notable performer was Ms. Thomson — she was comfortable as her character and kept interacting with others and playing throughout.

Act Two, “The Prison”, took place in a prison. It seemed to concern a racial war between white prisoners and, umm, non-white prisoners (who were either Asian or Hispanic). The prisoners and other characters were: Carmen (Metry), a former foster child who found heroin on the streets; Mengtao (Zhou), a Chinese Black Widow who murdered seven boyfriends and is now in love with the guard, Nick (Harmantzis), who was brought up in an abusive environment and has pent up frustration and anger. Azur (Valcour) was sexually brutalized, and so strangled her oppressors and drank their blood. Katherine (Bruton) is a housewife with particular values, so she poisoned the blacks that moved into her neighborhood with arsenic. Christina (Ramos) had her child taken away, and is soon to be released — she’s also the only sane person in the unit. Eva (Kastner-Puschl) is a slutty murderer who killed her boyfriend, and subordinate to the leader of the “Whities” and makes out with the guard. Margaret (Boeckman) is a lifer who killed a nun who physically abused a friend, who is also under the rule of white supremacist Katherine. Lily (Barber) drowned her infant daughter and 3-yo son. Lau (Pu) is from a prominent family who killed her fiance. Elle (Logan) is a southern girl who had a psychotic break and dismembered the torso of her ex-husband. Quite a fun bunch. Tickling the keys was Dolores Cliburn (Mark Robson), a cross-dressing former piano instructor with a penchant for arson.

I’d list memorable performances, but I was so involved with watching this one I forgot to make any notes.

Act Three, “The Family Reunion”, brought together a large disfunctional family to see Grandpa Mark (Mark Robson). The family members were as follows: Katia (Kotcherguina), a fun-loving party-going college student.  Shelley (yes, the one divorced from Jaime of the first act) (Mitchell), who is still hurting from the divorce (80 years ago?). Laura (Remy), the father of the family who came out last year and is transitioning, trying to connect with her two daughters, Ekaterina/Katia and Lindsey, who is estranged from her sisters Anna and Sarah. Anna (Buck), the mother of three who just wants perfection, and who has cut ties with two of her rebellious children, Michelle and Jen. Carolyn (Forte) is married to Andrew (Metzger), the winner of a reality show. Jen (Hansen) is a feminist lesbian. Sarah (Baumgarten) is a single-mother to Andrew, and has found Jesus and judgement. Michelle (Drever) left home at 16 and is a paleontologist and does makeup. Lindsey (Fuson) is a defiant teenager feeling abandoned with her father’s transition and her sister going off to college.

Again, this was an act where I was so caught up following the performances that I failed to make notes.

Alas, yesterday’s was the last performance. Operaworks (FB) will have a winter production on January 16, 2016, so look for it.

Upcoming Shows: August continues the theatre craziness, with a double header at Theatricum Botanicum (FB) the first weekend: “As You Like It” on Saturday, and the rescheduled “Green Grow The Lilacs” on Sunday.  The second weekend of August is equally busy, with “The Fabulous Lipitones” at  The Colony Theatre (FB) on Friday, our summer Mus-ique show on Saturday, and Concerts on the Green in Warner Park (with a Neil Diamond cover band) on Sunday. The third weekend of August is calmer, but only because we moved theatre off the weekend because my wife is driving my daughter’s car back to the bay area. As for me, I might very well go back to see the revised “Jesus Christ Superstar” at REP East (FB) — they are returning to have live music and I expect that will make a significant difference. The third week of August may see us back at REP East (FB) for their “secret seventh show”, which has been revealed to be “A Company of Wayward Saints“. After that we’ll need a vacation … but then again we might squeeze in Evita at the Maui Cultural Center (FB) the last weekend of August. September right now is mostly open, with the only ticketed show being “The Diviners” at REP East (FB) and a hold-the-date for “First Date” at The La Mirada Theatre for the Performing Arts (FB). October will bring another Fringe Festival: the NoHo Fringe Festival (FB). October also has the following as ticketed or hold-the-dates: CSUN’s Urinetown (end of October – 10/30 or 11/1);  “The Best of Enemies” at The Colony Theatre (FB) (Ticketed for Sat 10/10); and  “Damn Yankees” at Cabrillo Music Theatre (FB) (Ticketed for Sat 10/17). As always, I’m keeping my eyes open for interesting productions mentioned on sites such as Bitter-Lemons, and Musicals in LA, as well as productions I see on Goldstar, LA Stage Tix, Plays411.