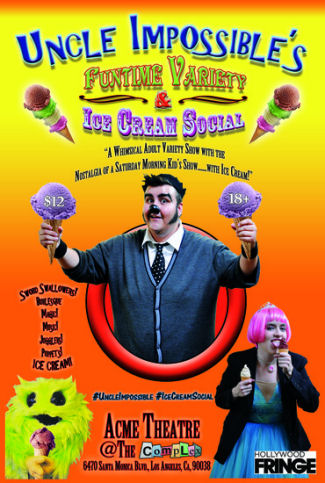 OK, those of you who don’t know who Bob McAllister is or what Wonderama was, I’ll wait while you look it up.

OK, let’s go. As you probably know if you are friends with me on Facebook, I’m a big fan of the children’s programming that used to exist on TV. I’m talking the local stuff — before syndication: Sheriff John, Engineer Bill, Hobo Kelley, Tom Hatten. There were also the better known network shows: the aforementioned Wonderama, Captain Kangeroo, Howdy Doody, and such. These shows declined through the 1970s and 1980s; I doubt that many folks younger than 40 remember watching them live at all. But for those of us who did — they bring back memories.

So, when I was reading the 2015 Hollywood Fringe Festival (FB) show list and saw a show with the following description, I was intrigued:

The original Uncle Impossible was an Imaginary Friend & beloved Children’s Show Host paving the way for those like Captain Kangaroo & The Muppet Show. Later in his life, he became a recluse & a shut-in up until his passing. Upon his passing he left a large inharetance to his only living heir; his estranged and eccentric nephew Rex The Impossible. In his Uncle’s will, it states that Rex would inherit the large fortune only if he continues his beloved uncle’s show “Uncle Impossible’s Funtime Variety & Ice Cream Social”. Rex agreed to the terms, but decides to do it HIS way, making it an Adult Version of a Saturday Morning Kid’s Show.

With the help from his Oddly Sweet Sidekick; Princess Bebop A’Lula, Rex The Impossible brings the new “Uncle Impossible’s Funtime Variety & Ice Cream Social” on stage by blending the Whimsy of Saturday Morning Kids Shows & Cartoons that we all know & love with Zany Adult themed Variety Acts creating an off the wall experience…….possibly with Ice Cream.

An adult version of children’s shows. What an intriguing idea? Think of the possibilities? Think of what Hobo Kelley might see in her magic mirror? Think of the toys her toy machine might produce? And the cartoons they might show? The characters they might invent (in the spirit of the aforementioned Bob McAllister)?

Naturally, I went out and got tickets to Uncle Impossible’s Funtime Variety & Ice Cream Social (HFF) at the Complex Theatres (FB). It was our second show on Sunday. Sad to say, I think the potential of the idea didn’t live up to its execution. But at least we got ice cream.

Uncle Impossible’s show, run by his nephew Rex Impossible (FB)* , assisted by Princess Bebop A’lua was strictly a low-budget affair — and they knew it. In that, it had the appropriate air of a local TV show where things could (and often did) go wrong. But the show was less about the hosts, and more about the variety acts they booked to fill the time. In many ways, they could make (or in our case, break) the show. Let’s look at the various pieces in our production (every performance has different acts):

At least the ice cream was good. Well, OK for commercial ice cream.

In short, the show appeared to be low budget in intent and it knew it, and it went for it. In that, it was good, plus there was ice cream. Perhaps that was the intent. Perhaps it was the burlesque style. I know that burlesque and the clown arts are their own distinct community, and perhaps that style didn’t mesh with the theatrical approach I’m used to. This, after all, is Fringe, which includes everything under the sun.

But I can only judge based on my impressions and my tastes. The problem, I’ll note, wasn’t prudishness. I can handle a good adult show. It was more that I was disappointed because it could just have been so much more. Looking at the pages for many of the acts, I got the sense that there was real talent there, but that talent didn’t come across as presented. That was a loss. Further, the notion of an adult children’s show — especially one that wasn’t blatant about it but used double entendre to reach the adult audience could have been great. Even the strippers could have worked — had the host stayed and reacted to the stripper. It is the reactions that make the funny, not the stripping. Think about Pee Wee Herman. What makes the show work is that Pee Wee is always that child at heart. Even if Rex Impossible was going for the adult humor of Pee Wee Herman, the Princess could have been representing the shocked child. But as it was, it just quite didn’t hit the mark for me. This is too bad, because the concept — executed correctly — could have been brilliant. I will give them points for effort.

I’ll note that one factor — which Rex can’t control, might be age. Not the lower bound of the audience age, but the upper. I’m 55. I was a child in the era of the kid’s TV shows. I remember Sheriff John; I watched Wonderama. I also watched Pee Wee Herman. There were other, younger folks in the audience that found this uproariously funny — and I won’t fault them for that. Humor is intensely personal. To use a baseball metaphor: This was a base hit or a double; it wasn’t a home run. I was hoping for the excitement of the home run, but I’m happy that it wasn’t an error.

On the technical side: according to Rex The Impossible, Brad Bentz was the Sound Tech & Stage Manager. Rex the Impossible was the Creator, Director & Producer of the show. He indicated that although the names are strange, that’s what they go by in the Burlesque, Variety, Cabaret and Circus Performance world.

There is one more performance of Uncle Impossible on Thursday, June 25 at 11:15 PM. Tickets are available through the Fringe website. If this is your style — especially if you like burlesque — go for it. It was enjoyable for me, but could have been so much more.

Upcoming Shows: The Fringe craziness ends with Medium Size Me, (HFF) at the Complex Theatres (FB) on Thursday 6/25 and Might As Well Live: Stories By Dorothy Parker (HFF) at the Complex Theatres (FB) on Saturday. June ends with our annual drum corps show in Riverside on Sunday. July begins with “Murder for Two” at the Geffen Playhouse (FB) on July 3rd, and “Matilda” at the Ahmanson Theatre (FB) on July 4th. July 11th brings “Jesus Christ Superstar” at REP East (FB). The following weekend brings “The History Boys” at the Stella Adler Theatre (FB) on Saturday (Goldstar), and “Green Grow The Lilacs” at Theatricum Botanicum (FB) on Sunday.  July 25th brings “Lombardi” at the Lonny Chapman Group Rep (FB), with the annual Operaworks show the next day. August starts with “As You Like It” at Theatricum Botanicum (FB), and is followed by the summer Mus-ique show, and “The Fabulous Lipitones” at  The Colony Theatre (FB). After that we’ll need a vacation! September right now is mostly open, with the only ticketed show being “The Diviners” at REP East (FB) and a hold-the-date for “First Date” at The La Mirada Theatre for the Performing Arts (FB). October will bring another Fringe Festival: the NoHo Fringe Festival (FB). October also has the following as ticketed or hold-the-dates: Kelrik Production (FB)’s Urinetown at the Monroe Forum Theatre (Hold for Sat 10/3);  “Mrs. A. Lincoln” at The Colony Theatre (FB) (Ticketed for Sat 10/10); and  “Damn Yankees” at Cabrillo Music Theatre (FB) (Ticketed for Sat 10/17). As always, I’m keeping my eyes open for interesting productions mentioned on sites such as Bitter-Lemons, and Musicals in LA, as well as productions I see on Goldstar, LA Stage Tix, Plays411.