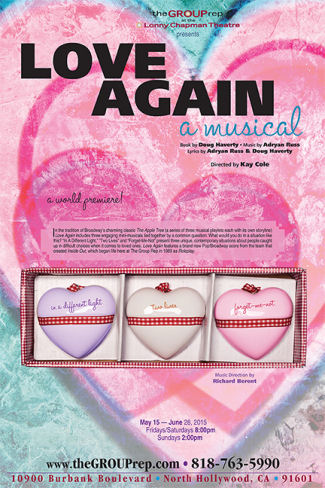 Back in February, we saw the Southern California return of a Doug Haverty (FB) and Adryan Russ (FB) musical that started at the Lonny Chapman Group Rep (FB): Inside Out.  At that time, I noted that the same team had a new musical premiering at the Group Rep in late May/June: Love Again. I made a note to get tickets when they came across one of the discount sites (I did win a gift certificate to Group Rep in a silent auction; I’m using that for their next show, Lombardi). Well, it is now the end of May, so guess where I was this afternoon :-).

I titled this writeup “The Art of Love“, which is the name of a new song that Neil Diamond sang last night. It is also a good summation of this show, which consists of three one-act stories about love. They all make a point about love and the decisions we make, and that we might come back to revisit. I think the stories will resonate with different people differently, but they were all reasonably enjoyable.

As usual, let’s look at this production through the three different lenses: story, performance, and technical.  Love Again features a book by Doug Haverty (FB), Music by Adryan Russ (FB), and lyrics by both Doug Haverty (FB) and Adryan Russ (FB). The three stories are connected solely by a theme of love — there are no common characters or other story elements. Connection was provided solely by elements of the opening song that resurfaced at the act interstitials.

The first story, “In a Different Light” (which, admittedly, was harder for me to follow as I was drowsy from migraine meds) dealt with two couples in Paris: Maxwell and Jane, out to have a second honeymoon, and Craig and Bonnie, out there for a business presentation with Craig’s boss, Fiona. When Craig bumps into Jane and rekindles a college relationship, the question arises of what will happen. I found the story itself reasonably interesting and particularly enjoyed one of the actresses; however, I found the ending a bit abrupt. I was in the last song, got a pinch drowsy, and — boom — it was over. I initially thought I actually drowsed out, but I didn’t. It actually had an abrupt ending that didn’t resolve the story. I think if anything in the writing needs improvement, it is the ending of this first act; hopefully, this can be resolved and clarified a little in the next production.

The second story, “Two Lives”, dealt with two best friends (Fanny and Loretta) who have an auto accident. The scene takes place in their hospital room, where both are brain dead and on live support. Doctors are encouraging the relatives to “pull the plug”, but they are reluctant. They each bring scents that their loved one would remember: Hal brings a sachet for his mom, Fanny; Gary brings roses for his wife, Loretta. This awakens the women, but not in a way that registers on the brain wave monitor — for they can only smell and hear. Fanny is able to encourage her son to start a relationship with the nurse, LeWanda. The question raised here is what one does for a loved one in this situation.

The last story, “Forget Me Not”, is perhaps the most fleshed out; it is certainly the best story. A family (Steward and Penny, and son Derrick) is dealing with two aging parents (Harold and Kathryn) with significant memory loss. The situation is getting more than the family can handle, until the son comes up with a novel solution: Perhaps if they have forgotten the present, they can forget the fact that they divorced and live together again. As someone who is dealing with an elder in a similar situation, this vingnette touched a nerve. The portrayal of the elders was realistic, and the use of mirror younger versions of the characters was very touching and moving. Kudos to the director, Kay Cole, for the emotion brought out here.

Through all three stories, there were a number of songs by Haverty and Russ. These expressed the emotions of the characters well and were lovely and melodic. Unfortunately, they all came across (at least in my memory) as somewhat similar. A bit more variety and energy are needed to make the music more memorable and distinct. Music direction was provided by Richard Berent (FB), assisted by Paul Cady/FB. The show featured an onstage piano (behind scenery) combined with recorded tracks.

Turning to the performances: the group of eleven actors swapped in and out between the acts and interstitials. Let’s start with the women.  Amy Gillette (FB) (Bonnie, Katie) not only gave very touching performances in the first and third stories, she had an absolutely wonderful and spot-on voice. Also notable was Kathleen Chen (FB) as LeWanda in the second story — again, a very nice performance and a lovely voice. Also particularly strong was Debi Tinsley (FB) as Loretta — again, a touching performance and great vocals. Michele Bernath (FB) was great as Fanny in the second story and Kathryn in the third story; I saw her in Awake and Sing, she was great there as well. Lastly, I particularly liked Janet Wood as Jane in the first story and Penny in the last story. In smaller roles were Renee Gorsey (FB) as Fiona, a suitably annoying boss in the first story; and Lauren Peterson as Dr. Hiller in the second story.

It is perhaps in the technical that this production fell down. Chris Winfield‘s Set Design (under the inspiration of the director) was a sponge-painted amalgam that covered every wall, floor, and 98% of the other surfaces of the tables and chairs and blocks. From the talk-back, we learned the intent was to focus on the actors, but it just didn’t work. The bright colors just served to distract, and the set would have been much better as a simpler black and white box, if there was no desire for realism. The lighting by J. Kent Inasy worked well to establish mood. While we’re on Mr. Inasy, I must note that his IMDB bio shows he worked on Herman’s Head; I’m sorry, Pixar’s Inside Out, but you’re just a pretender to the original version of the story, Herman’s Head.  The sound design by Steve Shaw worked well — particularly the sound effects in the second story. Lastly, the costumes by Angela M. Eads worked well to establish the characters. No credit was provided for stage manager.

Love Again continues at the Lonny Chapman Group Rep (FB) through June 28, 2015. Tickets are available by calling 818-763-5990 or visiting the online ticket site. Discount tickets are available through Goldstar and LA Stage Tix. This is a pleasant and enjoyable show; it is particularly worth seeing if the stories appeal to you or you are a fan of the Russ/Haverty team.

Upcoming Shows: The last weekend of May brings “Entropy” at Theatre of Note (FB) on Saturday, and “Waterfall“, the new Maltby/Shire musical at the Pasadena Playhouse (FB) on Sunday. June looks to be exhausting with the bounty that the Hollywood Fringe Festival (FB) brings (ticketing is now open). June starts with a matinee of the movie Grease at The Colony Theatre (FB), followed by Clybourne Park (HFF) at the Lounge Theatre (FB) on Saturday, and a trip out to see the Lancaster Jethawks on Sunday. The second weekend of June brings Max and Elsa. No Music. No Children. (HFF) at Theatre Asylum (FB) and  Wombat Man (HFF) at Underground Theatre (FB) on Saturday, and Marry Me a Little (HFF) by Good People Theatre (FB) at the Lillian Theatre (FB) on Sunday. The craziness continues into the third weekend of June, with Nigerian Spam Scam Scam (HFF) at Theatre Asylum (FB) and Merely Players (HFF) at the Lounge Theatre (FB) on Saturday, and Uncle Impossible’s Funtime Variety & Ice Cream Social, (HFF) at the Complex Theatres (FB) on Sunday (and possibly “Matilda” at the Ahmanson Theatre (FB) in the afternoon, depending on Hottix availability, although July 4th weekend is more likely). The Fringe craziness ends with Medium Size Me, (HFF) at the Complex Theatres (FB) on Thursday 6/25 and Might As Well Live: Stories By Dorothy Parker (HFF) at the Complex Theatres (FB) on Saturday. June ends with our annual drum corps show in Riverside on Sunday. July begins with “Murder for Two” at the Geffen Playhouse (FB) on July 3rd, and possibly Matilda. July 11th brings “Jesus Christ Superstar” at REP East (FB). The following weekend brings “Green Grow The Lilacs” at Theatricum Botanicum (FB).  July 25th brings “Lombardi” at the Lonny Chapman Group Rep (FB), with the annual Operaworks show the next day. August starts with “As You Like It” at Theatricum Botanicum (FB), and is followed by the summer Mus-ique show, and “The Fabulous Lipitones” at  The Colony Theatre (FB). After that we’ll need a vacation! As always, I’m keeping my eyes open for interesting productions mentioned on sites such as Bitter-Lemons, and Musicals in LA, as well as productions I see on Goldstar, LA Stage Tix, Plays411.

2 Replies to “The Art of Love”