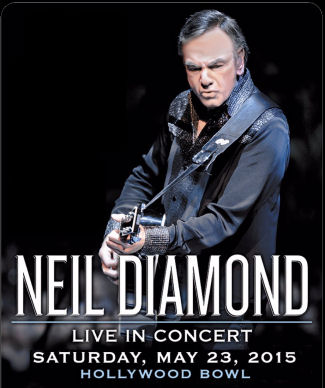 Neil Diamond (FB) is one of those key performers in music history — one of the major songwriters who moved from writing his own music that was covered by others to being a major singer-songwriter in his own right (Carole King is another writer in that vein). Neil Diamond in concert is well known to be something special. From the original Hot August Night in 1972 to return visits to the Greek Theatre or the Bowl — his concerts are great. When I started getting announcements about his tour to the Bowl this year I was… disinterested. I thought they would sell out too fast; I was unsure about the quality of the concert given his age (74). More importantly, it was also the evening of Confirmation at Temple and I was encouraged to be there a Board member. But then I got a call from my daughter asking me to try to get tickets so she could surprise her mom after she got home from school. My daughter takes precedence. Luckily, there were tickets on Goldstar; so last night saw us at the Hollywood Bowl. I’m guessing Diamond doesn’t sell out as he used to, although the 18,000 seat Bowl appeared full. I’ll note that the show was also live-streamed on Periscope.

Before I go into the show itself, one comment about getting to the bowl. Normally, we take the Park and Ride to the Bowl from Chatsworth. The Park and Ride prices had gone up, so this time we experimented with Metro to the Hollywood and Highland Red Line station, and then taking the shuttle to the bowl. Metro worked wonderfully to get us to Hollywood. What we encountered in Hollywood was unexpected. There was a Paramore concert at the Dolby Theatre, and both the Hollywood and Highland facility, as well as traffic in the area, was FUBAR thank to Para-natics. This meant that the shuttle that was supposed to show at 7:00 PM couldn’t make it to the pickup point, and then couldn’t guarantee making it to the Bowl on time (although the Bowl is less than 10 minutes away). This forced us to hoof it to the Bowl — which luckily wasn’t that bad. Still, it is something to think about next time.

As for the concert itself: Musically, it was wonderful. The music was everything you would expect from Neil. The set list is below. Where something was slightly lacking was in Neil’s dialogue with the audience; at least in the beginning. He started out low energy, he seemed confused and perhaps befuddled. During “Red Red Wine” he walked out the walkway to the audience, and then wondered how he got out there and how to get back. Although it was funny, it was also a reminder that the artists of our youth are aging; they are senior citizens and may not be around for much longer.† Tom Paxton, himself up there in age now, was prophetic when he mused whether Mick Jagger (who recently did a concert down the street) read of self-rising chairs over his breakfast of yogurt and bran. He warmed up as the show went on, and luckily he primarily stuck to the music.

[†ETA: On Twitter, someone responded to this comment that it might have been Diamond joking. Perhaps, although it didn’t strike me that way given how it was said and the energy behind it. There were also numerous other times where he seemed to forget things: the name of special group that was there that night (Jennifer Diamond), or the name of his new album (Melody Road). A fact of life is that our music icons age — although the music is timeless, the people are human like us. I recall a Peter Yarrow solo concert at UJ where Peter was just rambing and didn’t realize it. I’ll note it also could be due to some medication taken before the show having an unexpected reaction. It could also have just been a bad night. In any case, for those Diamond fans out there, it was merely an observation, and it didn’t take anything away from the timeless music.]

One last note related to Diamond’s aging: The song “Girl, You’ll Be a Woman Soon” acquires a creepy overtone when sung by a 74 year old. As he sang it, I was thinking it might be Josh Duggar’s anthem. [Too soon?]

Another factor that struck me was that most of these songs were written before 1985; only two were newer. That says something about how Diamond’s output has changed; that said something about what his fans expected. Of course, they loved the classic hits — they were on their feet, phones out recording the show even though they shouldn’t.  The show ran about two hours, with no intermission.

The songs in the show were:

Diamond’s set include a large diamond-shaped video screen, which was used to good effect to project a home movie montage of Neil’s youth during “Brooklyn Roads”, and for wonderful visuals during “Coming to America”. He had a very strong backing band and backing singers. He was courteous enough not only to introduce them, but to give each their own solos during “Cherry Cherry”.

One additional observation about the audience that night. As we walked out, we joked that when Diamond originally played the Greek, the audience was probably on drugs. The current audience is probably still on drugs, only different ones (blood thinners, anti-depressants, blood pressure meds, etc.)

This was a lease event at the Bowl, and crowd control was not up to usual bowl standards. In particular, the security and ticket taking was a confused mess that created a bottleneck  at the bowl entrance and added to the crowding and gridlock. There was a similar mess at the end; we just opted to walk down the hill back to Hollywood and Highland than to mess with the shuttle bus in that crowd.

As we walked down the hill, we mused about the following question, which I leave you with: What musical artist of the Millenial or later generation — that is, an artist who rose to prominence since 2000 — with be the equivalent of Diamond when they turn 74? That is, who of today’s modern pop artists will still be performing in their 70s, still filling double-digit-thousand seat arenas with fans in their 40s, 50s, and 60s? Lady Gaga? Madonna? Missy Elliot? Any Hip-Hop or Rap artists? Not listening to pop music, I don’t have the answer, but it is an interesting question.

Upcoming Shows: This afternoon brings “Love Again“, a new musical by Doug Haverty and Adryan Russ, at the Lonny Chapman Group Rep (FB).  The last weekend of May brings “Entropy” at Theatre of Note (FB) on Saturday, and “Waterfall“, the new Maltby/Shire musical at the Pasadena Playhouse (FB) on Sunday. June looks to be exhausting with the bounty that the Hollywood Fringe Festival (FB) brings (ticketing is now open). June starts with a matinee of the movie Grease at The Colony Theatre (FB), followed by Clybourne Park (HFF) at the Lounge Theatre (FB) on Saturday, and a trip out to see the Lancaster Jethawks on Sunday. The second weekend of June brings Max and Elsa. No Music. No Children. (HFF) at Theatre Asylum (FB) and  Wombat Man (HFF) at Underground Theatre (FB) on Saturday, and Marry Me a Little (HFF) by Good People Theatre (FB) at the Lillian Theatre (FB) on Sunday. The craziness continues into the third weekend of June, with Nigerian Spam Scam Scam (HFF) at Theatre Asylum (FB) and Merely Players (HFF) at the Lounge Theatre (FB) on Saturday, and Uncle Impossible’s Funtime Variety & Ice Cream Social, (HFF) at the Complex Theatres (FB) on Sunday (and possibly “Matilda” at the Ahmanson Theatre (FB) in the afternoon, depending on Hottix availability, although July 4th weekend is more likely). The Fringe craziness ends with Medium Size Me, (HFF) at the Complex Theatres (FB) on Thursday 6/25 and Might As Well Live: Stories By Dorothy Parker (HFF) at the Complex Theatres (FB) on Saturday. June ends with our annual drum corps show in Riverside on Sunday. July begins with “Murder for Two” at the Geffen Playhouse (FB) on July 3rd, and possibly Matilda. July 11th brings “Jesus Christ Superstar” at REP East (FB). The following weekend is open, although it might bring “Green Grow The Lilacs” at Theatricum Botanicum (FB) (depending on their schedule and Goldstar).  July 25th brings “Lombardi” at the Lonny Chapman Group Rep (FB), with the annual Operaworks show the next day. August may bring “As You Like It” at Theatricum Botanicum (FB), the summer Mus-ique show, and “The Fabulous Lipitones” at  The Colony Theatre (FB). After that we’ll need a vacation! As always, I’m keeping my eyes open for interesting productions mentioned on sites such as Bitter-Lemons, and Musicals in LA, as well as productions I see on Goldstar, LA Stage Tix, Plays411.