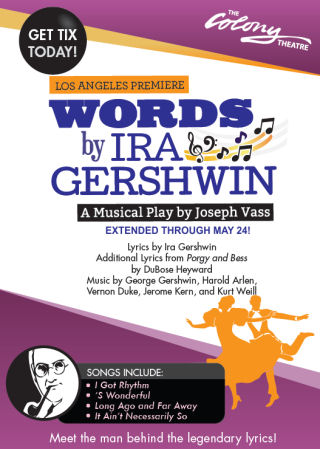 Whenever I enter a song into iTunes, it asks me for the composer. The software designer cared more about who wrote the music than who wrote the lyrics. Yet it is often the lyrics that stay with us; the lyrics that tell the story and convey the meaning. The issue isn’t just with iTunes. Often when we think of musical teams, we think about the music and the composition, and not the lyrics and the poetry. The musical we saw last night at The Colony Theatre (FB) — correction, musical play — highlighted that missing half. The production, “Words by Ira Gershwin“, focused on the lesser known half of the Gershwins: Ira Gershwin. It was a wonderful production that not only had great music, but taught me a lot about someone I had only viewed in juxtaposition to his brother. It is well worth seeing.

The structure of Words by Ira Gershwin is very simple. The author, Joseph Vass, uses the simple approach of having Ira Gershwin (Jake Broder (FB)) tell his story, with the songs being illustrated by a talented crooner (Elijah Rock (FB)) and chanteuse (Angela Teek (FB)). This structure (at least in my memory) reminded me a lot of the wonderful Ain’t Misbehavin’ — a simple structure that illustrated the songs and told the story, without trying to construct an artificial scaffold or being a random jukebox.

The order of presentation was sometimes chronological, and sometimes not. This was perhaps my only quibble with the show. At the end, when Ira related the death of his brother, I was left waiting for the rest of the story. It wasn’t made clear that many of the collaborations discussed in the show — such as those with Kurt Weill, Jerome Kern, and Harold Arlin, occured after George‘s death. The brief mention (in passing) of other contributors to the Great American Songbook — in particular, Irving Berlin, George Cohan, and Cole Porter — made me wonder whether there was any interaction between them. It is hard to believe their circles never crossed.

Still, the information presented about Gershwin was often new to me. I enjoyed the observations about lyrics and poetry, and the difficulty of fitting lyrics to established music. I found the observation about how music conveys mood and lyrics convey meaning, and the importance of the two together, to be quite astute. I had never really looked at Ira Gershwin in isolation from his brother, and this production prompted me to go out and pick up some of Gershwin’s collaborations with other composers.

This is one of those productions that I believe could have life beyond the mid-size Los Angeles stage. Given the similar structure to Ain’t Misbehavin’, the past success of musicals exploring other popular composer and lyricist catalogs, and the familiarity of Gershwin’s music… this one might be doable on a larger (read “Broadway”) stage.

The performances in this show were spectacular — both the actors and the musicians. Acting first :-). Broder’s portrayal of Gershwin created the character. He had the look of Ira Gershwin down perfectly. His singing voice was not perfection, but the imperfections made his portrayal of the lyricist even more realistic (you know this to be true if you’ve ever listened to performances of Cy Coleman, Sheldon Harnick, Fred Ebb, and even Irving Berlin. With the exception of Adolph Green, there’s a reason they weren’t on the stage.) You quickly accepted that this bespecticled accented man was a simple lyricist, content to write poetry, fit words to music, and be in the shadow of his more famous younger brother.

Supporting Broder’s Gershwin were Rock and Teek as the crooner and chanteuse, respectively. Neither were particular characters with backstories and such. They were there to sing. But they brought something extra through little interactions with Broder’s Gershwin, each other, and the members of the band that gave them appealing personalities. It was these little touches — which I’ll credit to the director, David Ellenstein, who originated the show at the North Coast Repertory Theatre in Solana Beach — that brought needed warmth to the production. Both Rock and Teek had wonderful voices; Rock’s was recently spotlighted in a concert performance at the Colony (and we saw Teek when she was in Ray Charles Live at the Pasadena Playhouse).

Another “performer” was the onstage band, consisting of Kevin Toney (FB) (Piano/Conductor), Terry Wollman (FB) (Electric and Acoustic Guitar); John B. Williams (Bass), and Greg Webster (Drums). They were spectacular music-wise, and the production provided each of them with a chance for a short solo spot. They also had interactions with the performers, and you clearly got the sense that there was fun on this stage — they liked each other, and they loved the music and the songs. This joyfulness came across to the audience and served to amplify the entire production. Well done.

Rounding out the performance and performance support side: Kevin Toney (FB) also served as music director; with the author, Joseph Vass, as musical arranger (and source for recorded piano performances). There was no specific credit for choreography, so presumably the movement was designed by the director, David Ellenstein. Whoever designed it, it worked well — in particular, Rock’s wonderful and unexpected tap number. Rebecca Eisenberg was the Production Stage Manager.

Turning to technical side: The scenic design by David Potts was very simple: a comfy chair, a light and table, a step-up area for the band, and a backdrop for projections. Simple, but it worked. The sound design by Drew Dalzell (FB) did what it was supposed to do: convey the sound well, although the directionality of the recorded piano had you turning your head to figure out why it was behind you. Similarly, the lighting by Jared A. Sayeg (FB) conveyed the mood well, although the color transitions of the scrollers were clearly noticeable and slightly distracting. The costume design by Dianne K. Graebner (FB) worked reasonably well, although my wife found some of Teek’s costumes to be overly clingy when they would have looked better looser. Properties and set dressing were by John McElveney (FB). Scenic art was by Orlando de la Paz. Amy Lieberman was the casting director. The Colony is under the artistic direction of Barbara Beckley.

“Words by Ira Gershwin” has been extended for one week; it now ends on May 24. You can purchase tickets through the Colony Website, or by calling the theatre at (818) 558-7000. Discount tickets through Goldstar are currently sold out;  only full price tickets are available through LA Stage Tix. The show is well worth seeing.

I Love 99 Notes. The Colony Theatre is one of those success stories: A 99 seat theatre that was able to grow into a contract house that pays AEA rates to AEA actors. It took a strong subscriber base and support from the City of Burbank to do this. Before the show, I spoke to Barbara Beckley about the current battle. We both agreed that Los Angeles audiences, trained by discounters such as Goldstar, will not pay for intimate theatre at rates that would permit the wages AEA wants. We also discussed the importance of bringing in all stakeholders (including audiences) and how do we draw younger audiences to the theatre and turn them into subscribers. Los Angeles needs a solution that works for Los Angeles. Los Angeles needs a solution that actually builds an audience that will financially support AEA contracts, and a solution that builds shows that are able to move on from the intimate theatre incubators to contract shows. We need to work together to find the solution, not impose one from above that doesn’t fit.

Upcoming Shows: Later today, we’re off to see a movie: It’s Mother’s Day, and my wife wants to see the Jim Parson’s animated movie “Home”. Next weekend brings “Dinner with Friends” at REP East (FB), and may also bring “Violet: The Musical” at the Monroe Forum Theatre (FB) (I’m just waiting for them to show up on Goldstar). The weekend of May 23 brings Confirmation services at TAS, a visit to the Hollywood Bowl, and “Love Again“, a new musical by Doug Haverty and Adryan Russ, at the Lonny Chapman Group Rep (FB).  The last weekend of May brings “Entropy” at Theatre of Note (FB) on Saturday, and “Waterfall“, the new Maltby/Shire musical at the Pasadena Playhouse (FB) on Sunday. June looks to be exhausting with the bounty that the Hollywood Fringe Festival (FB) brings (ticketing is now open). June starts with a matinee of the movie Grease at The Colony Theatre (FB), followed by Clybourne Park (HFF) at the Lounge Theatre (FB) on Saturday, and a trip out to see the Lancaster Jethawks on Sunday. The second weekend of June brings Max and Elsa. No Music. No Children. (HFF) at Theatre Asylum (FB) and  Wombat Man (HFF) at Underground Theatre (FB) on Saturday, and Marry Me a Little (HFF) by Good People Theatre (FB) at the Lillian Theatre (FB) on Sunday. The craziness continues into the third weekend of June, with Nigerian Spam Scam Scam (HFF) at Theatre Asylum (FB) and Merely Players (HFF) at the Lounge Theatre (FB) on Saturday, and Uncle Impossible’s Funtime Variety & Ice Cream Social, (HFF) at the Complex Theatres (FB) on Sunday (and possibly “Matilda” at the Ahmanson Theatre (FB) in the afternoon, depending on Hottix availability, although July 4th weekend is more likely). The Fringe craziness ends with Medium Size Me, (HFF) at the Complex Theatres (FB) on Thursday 6/25 and Might As Well Live: Stories By Dorothy Parker (HFF) at the Complex Theatres (FB) on Saturday. June ends with our annual drum corps show in Riverside on Sunday. July begins with “Murder for Two” at the Geffen Playhouse (FB) on July 3rd, and possibly Matilda. July 11th brings “Jesus Christ Superstar” at REP East (FB). The following weekend is open, although it might bring “As You Like It” at Theatricum Botanicum (FB) (depending on their schedule and Goldstar).  July 25th brings “Lombardi” at the Lonny Chapman Group Rep (FB), with the annual Operaworks show the next day. August may bring “Green Grow The Lilacs” at Theatricum Botanicum (FB), the summer Mus-ique show, and “The Fabulous Lipitones” at  The Colony Theatre (FB). After that we’ll need a vacation! As always, I’m keeping my eyes open for interesting productions mentioned on sites such as Bitter-Lemons, and Musicals in LA, as well as productions I see on Goldstar, LA Stage Tix, Plays411.