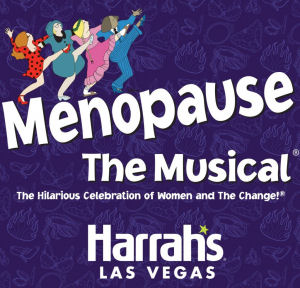 Just because I’m on vacation doesn’t mean that the live entertainment stops. Heaven forfend! We’re in Vegas doing an interval exchange, and that means finding some shows to see. The first show during this visit is the longest running scripted show in Vegas — it started at the Las Vegas Hilton (now the Westgate) in 2006, moved to the Luxor, and then moved to Harrahs earlier in 2015. It is also one of the few shows on the strip that is an AEA-contract show — most are not (although given what AEA did yesterday, AEA is not on my “nice” list — they have been “naughty”). The show I’m talking about is “Menopause: The Musical” (FB), a show that truly demonstrates the age-old adage: Know Your Audience.

Perhaps I should explain. For most shows, it is vital to know who your anticipated audience will be, and ensure they will come to the show. Back in the 1950s and 1960s, this was the “Theatre Club” audience that came to New York shows. Nowadays, it is often something heavily demograph-shopped — be it a family show, a show aimed towards a particular ethnicity, a show aimed towards youth, etc. No where is this truer than in Las Vegas. You know who will be seeing “Defending the Caveman“. You know who will be seeing “Evil Dead: The Musical“. You know who will be seeing Brittney Spears or Elton John. You can guess who Menopause: The Musical was squarely aimed at. And you would be right. I would guess that all the men in the audience were there due to their wives: they either bought the show because they thought their wife would like it, or the wife bought the tickets and dragged the husband along. This led to a very appreciative audience of the humor for the show. Of course, the stiff drinks they were pouring didn’t hurt. As for the men in the audience, they were happy because their wives were happy.

So what is Menopause: The Musical. It isn’t a parody show per se (certainly not in the sense of Evil Dead: The Musical) — it isn’t making fun of any previously published property. It doesn’t have original music; it repurposes popular songs from the 1950s, 1960s, and 1970s with new subject specific near-beer lyrics (book and lyrics were by Jeanie Linders). It’s a book musical, but not with a traditional style book. By that I mean that it doesn’t have any real antagonists or through story, characters don’t really change and grow, there is no story being told. If I had to try to categorize the book, I’d call it observational. It brings together four women going through “the change” to Bloomingdales (which serves no purpose other than to provide scene locations); this conjunction serves primarily to allow the women to commiserate about the impacts of menopause. At the same time, this allows the audience to identify with the women on stage, as 98% of the women have “been there, done that, got the T-shirt in the gift shop, and it is already dripping wet due to my latest hot flash”.

So, let’s dismiss the book. It’s fictional framework; the structural necessity that allows the songs. This façade of a book is the reason why the show is a success in Vegas — a city built on a fictional framework that attracts an audience of the right age to appreciate that framework. The ladies enjoy it — it is a safe night out with music they know, PG-rated to satisfy the visitors from the midwest, talking about  a universal human experience. You can’t really diss it (plus, if you did, you would have a hoard of hormonally-fluctuating women dealing with mood swings coming after you. As Benjamin Franklin once said, “I’m not going to spend the rest of my life writing in Europe.”)

That said, I’ll admit that I enjoyed the show. Being married to a women “of the appropriate age”, I identified with what the show was saying. The songs were cute, well performed, and entertaining. Watching the audience, the women present were having a ball. It was certainly worth Goldstar prices.

One thing that made the show work were the performances (all cast credits). Two of the actors were extremely strong “knock your socks off” singers and performance; the remaining two were just merely strong, and made up for it by strong comedy timing. Let’s start with the strong singers. As the “Professional Woman”, Lisa Mack (FB) was a knockout. She had an extremely strong singing voice that handled all the songs well, and she handled the movement and humor with great aplomb. I’ll note that it looks like Lisa has been doing this role for a long time — this comes across in her comfort in the role. She was just great to watch. Also strong in the singing camp was Jacquelyn Holland-Wright (FB) as the “Soap Star”. She started off a bit colder for me, but rapidly won me over (I had a similar thing with the similar lead in “Inside Out“). Again, she gave a strong performance and sang very well.

The remaining women impressed me more with their comedic flair and timing, although they were also strong singers. As “Earth Mother”, Vita Corimbi handled the role easily — which isn’t a surprise as she is one of the original actresses from 2006. Giggly and silly and funny and eccentric, you could just see she was having fun with the role onstage. Also having fun was Laura Lee O’Connell (FB) as the “Iowa Housewife”, who has been doing the role even longer — since 2005 in Seattle, plus the entire Vegas run. Laura was also having great fun with the role — in particular, her scene with the lingerie was just hilarious (without even speaking a word). Both were strong singers, but their comfort with the role made their comedy just stand out.

Rounding out the cast (not onstage at our performance) were the understudies: Lori Legacy (who also serves as dance captain) and Monica Heuser (FB).

Turning to the technical and artistic side. The production was directed by Seth Greenleaf (FB), who did a reasonable job for the venue. At time, I thought the actors were overplaying it a little, but this is the type of show that demands a little overplay. Choreography was by Daria Lynne Melendez, and it worked well on the small Improv stage at Harrah’s. I’ll note that both appear to be the original direction and choreography, so credit must go to the Production Stage Manager for preserving it. The original score and arrangements were by Alan J. Plado; however, the show used recorded music recorded by Michael Dubay on keyboards, Don Meoli on drums, and Jonathan Rem on bass. Linda Germany is the company manager; Phillip James Randall is the Production Stage Manager; and Elizabeth Herbert is the Assistant Stage Manager (and shill for show merch).

On the technical side, the scenic design of Sean Fanning was very simple: a backdrop with four doors, and various props. This simplicity was required because the venue transforms back and forth into the Improv Comedy Club. The lighting design by Ryan Partridge was reasonably simple and worked well — there were a few dark spots but that was more the fault of the spot operator. There is no credit for sound designer; this is too bad, because the sound requires a little adjustment as the performers are slightly over-amplified. Lastly, costume design was by Sue Hill and appear to go back to the original designs.  I thought they worked well; my wife thought all the costumes were nicely tailored to the body types and extremely flattering.

Upcoming Shows: We have one more show booked in Vegas: Penn & Teller at the Rio. Other shows that are possibilities are either Don Rickles at the Orleans or Jeff Dunham at Planet Hollywood, and Crazy Girls at the Riviera (before the Riveria goes away on May 4th) — the particular show depends on what shows up at Tix4Tonight.  Los Angeles theatre resumes in May with “Loopholes: The Musical” at the Hudson Main Stage (FB) on May 2. This is followed by “Words By Ira Gershwin – A Musical Play” at The Colony Theatre (FB) on May 9 (and quite likely a visit to Alice – The Musical at Nobel Middle School).  The weekend of May 16 brings “Dinner with Friends” at REP East (FB), and may also bring “Violet: The Musical” at the Monroe Forum Theatre (FB) (I’m just waiting for them to show up on Goldstar). The weekend of May 23 brings Confirmation services at TAS, a visit to the Hollywood Bowl, and “Love Again“, a new musical by Doug Haverty and Adryan Russ, at the Lonny Chapman Group Rep (FB).  The last weekend of May brings “Entropy” at Theatre of Note (FB) on Saturday, and “Waterfall“, the new Maltby/Shire musical at the Pasadena Playhouse (FB) on Sunday. June looks to be exhausting with the bounty that the Hollywood Fringe Festival (FB) brings (note that all Fringe dates are holds; ticketing doesn’t open until 5/1). June starts with a matinee of the movie Grease at The Colony Theatre (FB), followed by Clybourne Park (HFF) at the Lounge Theatre (FB) on Saturday, and a trip out to see the Lancaster Jethawks on Sunday. The second weekend of June brings Max and Elsa. No Music. No Children. (HFF) at Theatre Asylum (FB) and  Wombat Man (HFF) at Underground Theatre (FB) on Saturday, and Marry Me a Little (HFF) by Good People Theatre (FB) at the Lillian Theatre (FB) on Sunday. The craziness continues into the third weekend of June, with Nigerian Spam Scam Scam (HFF) at Theatre Asylum (FB) and Merely Players (HFF) at the Lounge Theatre (FB) on Saturday, and Uncle Impossible’s Funtime Variety & Ice Cream Social, (HFF) at the Complex Theatres (FB) on Sunday (and possibly “Matilda” at the Ahmanson Theatre (FB) in the afternoon, depending on Hottix availability, although July 4th weekend is more likely). The Fringe craziness ends with Medium Size Me, (HFF) at the Complex Theatres (FB) on Thursday 6/25 and Might As Well Live: Stories By Dorothy Parker (HFF) at the Complex Theatres (FB) on Saturday. June ends with our annual drum corps show in Riverside on Sunday. July begins with “Murder for Two” at the Geffen Playhouse (FB) on July 3rd, and possibly Matilda. July 11th brings “Jesus Christ Superstar” at REP East (FB). The following weekend is open, although it might bring “As You Like It” at Theatricum Botanicum (FB) (depending on their schedule and Goldstar).  July 25th brings “Lombardi” at the Lonny Chapman Group Rep (FB), with the annual Operaworks show the next day. August may bring “Green Grow The Lilacs” at Theatricum Botanicum (FB), the summer Mus-ique show, and “The Fabulous Lipitones” at  The Colony Theatre (FB). After that we’ll need a vacation! As always, I’m keeping my eyes open for interesting productions mentioned on sites such as Bitter-Lemons, and Musicals in LA, as well as productions I see on Goldstar, LA Stage Tix, Plays411.