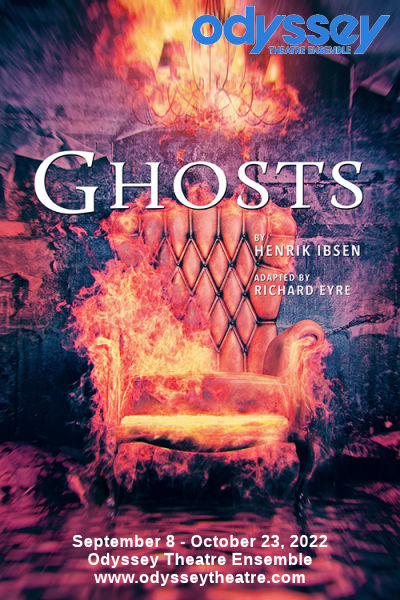 There are many reasons we go to see a show. Often, it is because the show is part of a subscription series. Sometimes, it is because it is something we have heard of and want to see. Occasionally, it is a recommendation or the urging of a publicist, or because the subject is just so intriguing. But the last reason is the most fun: because someone we know is involved in the show. In the case of Ghosts, currently running at the Odyssey Theatre Ensemble, the assistant director is a friend of our daughter. We’ve known this young man since he started doing theatre in 7th Grade, and we’ve seen him grow and excel in his career. When our daughter mentioned he was doing a show at the Odyssey, we just had to get tickets.

Now, that’s not to say we were going into the show blind. I had been sent material from the show’s publicist (I’m on a bunch of mailing lists due to this blog). But the title and the description didn’t catch me; I’m not one for spooky shows. I was familiar with the playwright, Henrik Ibsen, from A Dolls House; however, I had never heard of this. The version performed was adapted by Richard Eyre.

Well, I guess we were going into the show blind after all.

Ghosts tells the story of the Alving family. Looking over the summary of the plot on Wikipedia, I think they capture it as well as anything I could do:

Helen Alving is about to dedicate an orphanage she has built in memory of her late husband. Despite his affairs, Mrs. Alving stayed with him to protect her son Oswald from the taint of scandal and for fear of being shunned by the community.

In the course of the play, she discovers that Oswald (whom she had sent away to avoid his being corrupted by his father) is suffering from syphilis that she believes he inherited from his father.[a] She also discovers that Oswald has fallen in love with her maid Regina Engstrand, who is revealed to be the illegitimate daughter of Captain Alving and is therefore Oswald’s half-sister.

A sub-plot involves a carpenter, Jacob Engstrand, who married Regina’s mother when she was already pregnant. He regards Regina as his own daughter. He is unaware, or pretends to be, that Captain Alving was Regina’s father. Having recently completed his work building Mrs. Alving’s orphanage, Engstrand announces his ambition to open a hostel for seafarers. He tries to persuade Regina to leave Mrs. Alving and help him run the hostel, but she refuses. The night before the orphanage is due to open, Engstrand asks Pastor Manders to hold a prayer-meeting there. Later that night, the orphanage burns down. Earlier, Manders had persuaded Mrs. Alving not to insure the orphanage, as to do so would imply a lack of faith in divine providence. Engstrand says the blaze was caused by Manders’ carelessness with a candle and offers to take the blame, which Manders readily accepts. Manders in turn offers to support Engstrand’s hostel.

When Regina and Oswald’s sibling relationship is exposed, Regina departs, leaving Oswald in anguish. He asks his mother to help him avoid the late stages of syphilis with a fatal morphine overdose. She agrees, but only if it becomes necessary. The play concludes with Mrs. Alving having to confront the decision of whether or not to euthanize her son in accordance with his wishes.

Watching the play, I was first amazed that someone could come up with a story and develop this way to present it. I’m an engineer by trade, and I envy those who are so creative they can see characters as rich as this, and figure out how to structure a story and dialogue and characters like this.

The play raises a number of interesting questions. I think the first is the question of obligation of children to parents. Are children obligated to take care of their parents, no matter how their parent has treated them. We see that in this play with Regina, and the question of whether she is obligated to serve her “father” or her employer. The play makes the argument (despite what the Reverend says) that children are not so obligated. Sometimes the treatment of the child is such that it abrogates any implicit care agreement. Essentially, if the parent couldn’t show or provide the appropriate care for the child, why should the child care for the parent.

The play also touches on the other side of the question: What must a parent do for a child? Is it the parent’s job to do anything the child wishes? Even to help the child commit suicide if the child’s pain is sufficient? That’s the question Mrs. Alving is faced with at the end of the play. There’s a similar question with respect to marital obligations: Is the wife obligated to defend the memory of the husband? In this case, it is determined that Captain Alving, despite his public recognition, was secretly beating his wife, sleeping with his maid, and all other sorts of degenerate behavior. Should the wife continue to publicly uphold the public image? Should the parish? What to do with the money acquired through this degenerate behavior?

So the central question of the play is that of obligation, and the power it holds over us.

The secondary focus of the play is an exploration of generational guilt. How much do the behaviors of the parent influence the child, otherwise known as “Does the apple fall far from the tree?” How much is Oswald’s life and behavior influenced by his degenerate father? Did his mother save him by sending him away, or did that just make it worse? And what about Regina: Did she suffer by having the truth of her parentage hidden?

As you can see, this play raised a bunch of interesting questions. As directed by Bart DeLorenzo, assisted by Quest Sky Zeidler, the story unfolded at a brisk pace and held the audiences attention. The single open space was divided into a bunch of rooms, with most of the action taking place in a sitting room areas. The story was exposed gingerly, and the performers did a good job of bringing the characters to life.

All of the performances were strong. We meet Viva Hassis Gentes (Regina Engstrand) first, a vivacious and playful young thing who one can see wants to move up and out of where she is living now … but most decidedly not with her father, played by J. Stephen Brantley (Jacob Engstrand). Brantley does a great job of showing both sides of her father–a drunk whom you might not trust, and a man who is trying to do good under meager circumstances. As the Reverend, Barry del Sherman (Reverend Manders) has an appropriately stern countenance, and did a good job of playing a religious man with some problems underneath.

I was very impressed with Pamela J. Gray (Helene Alving), as the mother. She brought a great energy and spirit to the role, and her performance as things came crashing down was astounding. Rounding out the cast was Alex Barls (Oswald Alving). He played the character well, but there was something in his look that didn’t mesh right for me. But still, it was an enjoyable performance.

The design team did a mostly good job of turning the flat stage of the Odyssey into the spaces required for the story, and projecting the correct mood and tenor of the piece.  About my only quibble was John Zalewksi’s sound design. There was some constantly odd noise in the background that I later realized was supposed to be the rain, but only served to distract my attention. Other than that, the ambient noises were good. Frederica Nascimento’s Scenic Design created the spaces well, supported by the Scenic Art of Chris Bell. Lena Sands’ Costume Design seemed appropriate, and Christine Ferriter’s Lighting Design established the mood well — especially in the fire scenes.

For right now, we’re pretty much sticking with shows that come as part of our subscriptions or are of interest through our memberships. Looking ahead for the remainder of 2022:, the rest of October will bring The Addams Family at 5 Star Theatricals (FB), and To Kill a Mockingbird at Broadway in Hollywood (FB). November brings 2:22 – A Ghost Story at the Ahmanson Theatre (FB). Lastly, December will bring Annie at Broadway in Hollywood (FB).