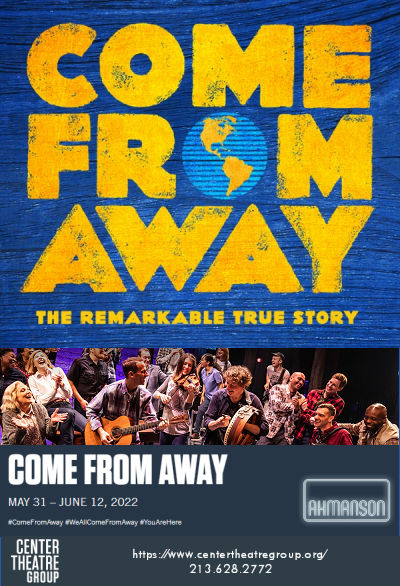 Seeing a show for a second time is much easier for me. This is especially true when about 70% of the cast and orchestra are the same. I can just point you to the previous writeup, and provide a few updates.

The story is unchanged. For those unfamiliar, this is the story of the community of Gander Newfoundland, which doubled in size when 9/11 occurred and planes from all over the world were diverted there. Come From Away (CFA) is the story of the people of Gander, and the people on the planes. It is a remarkably uplifting story that leaves you feeling good.

[And just like last time we saw this, it is paired with Dear Even Hansen (DEH). Last time, DEH is before; this time it follows. DEH, although popular, is much more problematic. CFA is centered around a tragedy, and how people find hope and family in it. DEH is centered around a lie, and how the hope from that lie eventually comes crashing down. I much prefer CFA.

The cast is essentially the same as the 2018 touring company. Here’s a paste of my cast list then, with changes noted:

*: At our performance, we had Kilty Reidy (IG, TW) swinging into this role.

As you can see, the bulk of the cast was the same. Performances were excellent from the ensemble.

Much of the on-stage orchestra was the same as well. Again, here’s a diff from 2018:

As with the actors, much of the band is the same. However, I’d say that this time the band has gotten stronger. I hadn’t realized last time that Kiana June Weber (★FB) was part of one of my favorite Celtic groups: Gaelic Storm. She’s married to orchestra-mate Martin Howley (IG), who is new for 2022 and is one of the long-time members of the Celtic band We Banjo 3 — another favorite group.  Isaac Alderson (FB) is also part of the Celtic music scene, being part of the band The Yanks. Steve Holloway (FB) also plays on loads of Celtic albums. So this touring band has loads of Celtic talent, which they show off during numbers such as “Screech In” and the jam session after the final bows. This is one of those rare shows when I can say that you should see the show not only for the great story and great performances, but for the rocking Celtic band!

Production, design, and the supporting team (stage mangers) are unchanged from 2018.

For right now, we’re pretty much sticking with shows that come as part of our subscriptions or are of interest through our memberships. That may change later in 2022. The remainder of June sees Pretty Woman at Broadway in Hollywood (FB), as well as Tom Paxon at McCabes. I thought we might make the Hollywood Fringe Festival , but with my ear problems and Karen being in a wheelchair — plus fuel costs — we’re missing it this year. July brings Moulin Rouge at Broadway in Hollywood (FB) [Pantages], Dear Evan Hansen at the Ahmanson Theatre (FB), Newsies at 5 Star Theatricals (FB), and Freestyle Love Supreme back at The Pasadena Playhouse (FB). August is quieter, with just The Prom at the Ahmanson Theatre (FB). Lastly (for this look ahead), September brings Oklahoma the Ahmanson Theatre (FB) and Jagged Little Pill at Broadway in Hollywood (FB), although they are on the same day so I’ll be shifting one show. September may also bring Andrew Lippa’s version of The Wild Party at the Morgan Wixson Theatre. This was a show I had been planning to see before the COVID shutdown, so I’m putting it in the “part of our subscriptions” list. There may also be some Hollywood Bowl stuff, depending on how my wife is doing.