If you can’t figure out why this post is named what it is, you’ll have to read to the end. If you get the connection, I’ve just created an earworm. In any case, this post is a requiem for some things that are nearly or dearly departed:

Oh, right, the title of the post. Take a listen: 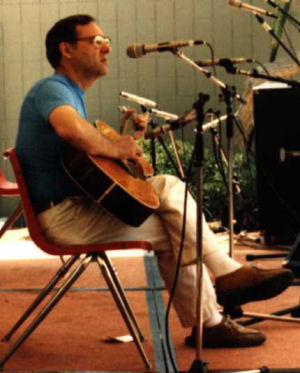 Sunday, I learned that my uncle, Tom Faigin, passed away at 4:30 AM. It wasn’t unexpected; but it is still a loss. As I did with my father when he died, I’d like to share a few remembrances.

When I think about Tom, first and foremost, I think about folk music. He was a musician at heart. He loved music. He taught music. He was at home playing a guitar, banjo, or mandolin. We shared that love (well, not playing, but of music — I can only play the cassette recorder). He introduced me to so many artists (especially when I digitized his record collection). I introduced him to a few. Although I could never play an instrument, I enjoyed listening to him play (and I’ll enjoy the one CD I have of him). We went to McCabes together a few times (I think he was the one that originally introduced me to Shep Cooke). We also had a lot of folk friends in common, for there are a large intersection between the folk communities and the cybersecurity communities.

He was also the political firebrand of the family. By that I mean that we had wonderful political discussion (especially as we were of a similar political bent). He was connected to the older labor-style Judaism that you don’t see these days. A Judaism more of action — and social action — than anything else. This also came through in the folk music.

In his later years, he was part of a musical group called the Geritones. His daughter is working on a documentary of the group. My memory of the Geritones is when they came to play for a membership recruiting day for Temple Beth Torah. They played a variety of old folk, Yiddish, and other Eastern European music.

I remember that he was an uncle my daughter loved as well. She loved to go over and visit, and as she got older and into Yiddish, they had another shared love. I also felt that her love of Yiddish was genetic, coming from my father and his father before him. Luckily, she was able to share her excitement of her trip to Eastern Europe with him. Alas, she wasn’t able to share her pictures after the trip.

His family suffered a loss a few years ago with the passing of his son, my cousin Nick. Nick, too, was an artist, and I think they shared that passion. Their musical tastes were different (and I’m not sure all understood), but art was in the blood.

He is survived by his wife, Ann, and his daughter Cece, and of course all of us cousins. Of the original four brothers (my father, Adrian; Herbert; Ron, and Tom), only my Uncle Ron remains. May he stay strong and healthy.

Skimming the headlines while changing tasks today brought some real sad news: Stan Freberg has passed away at age 88. This is confirmed by a post on his son’s Facebook: “My father died this morning. I am ok. To me, the father I knew and loved dearly and still very much do left me over a decade ago. He was, and will always be my hero and I will carry his brilliant legacy forward as best I am able. RIP, Stan Freberg, 1926-2015. I love you, daddy.”

Stan was a large influence on my personal sense of humor, ever since I found and memorized “The United States of American, Volume I: The Early Years” when I was child. I was lucky enough to learn about, and be able to attend, a celebration of Stan’s 70 years in the industry at American Cinemateque in November.  Even then, you could see that Stan was in decline — the quick required augmentation from his wife, Hunter.

A man is remembered by the work he leaves behind. The breadth and scope of Stan’s work — from animated cartoons to advertising to humorous records and yes, even to the stage, will ensure that Stan Freberg will long be remembered.

Pardon me while I adjust the iPod to play a little Freberg in his memory, and finish off the day.

It’s Saturday, and that means it is time to clear out the accumulated links of a busy week. I’d say I’d make stew, but it is Pesach after all, so perhaps we’ll have observation charosis: a chopped of mix of a bunch of news articles, sweetened with a little wine and cinammon.

It’s Saturday, and that means it is time to clean out the accumulated saved URL links (with a bit of commentary) from the week. Get your fill now — next week’s stew will be chametz-free!

The big big news today has been the passing of Leonard Nimoy. Nimoy was the touchstone of multiple generations as a result of the iconic character he created — and how he fought so valiantly against the Vietnam War and for the healthcare of children. Whoops. Wrong Spock.

Seriously, Nimoy was much much more than the character he created. He was a long-time supporter of Yiddish and the Yiddish Theatre, and excelled in multiple artistic venues. As we remember that “pointy eared Vulcan”, let us also remember the other sides of Nimoy. Here’s a great article from Tribute that recalls Nimoy’s recent interview for the Stars of David book, and how Judaism and Yiddishkeit influenced his life and the characters he portrayed.

P.S.: I love the quote that titles this post, which was Nimoy’s last communication. It so reflects why theatre is so important in life.

Finally, it’s Saturday. This has been a busy week — I’ve been accumulating articles, but haven’t had time during the week to post them. Before we jump into the stew, Happy Valentine’s Day to those that observe. What are we doing? We’re going to a wonderful organic Shabu Shabu restaurant we’ve discovered, and then seeing a musical story about the Loch Ness monster. And you?

The poet Rod McKuen died yesterday at age 81. When I think of McKuen, I always think of the following song, which was sung so beautifully by Mary Travers during her solo period. The words of the song ring true today, and provides something very important to remember as we see battles between black and white, right and poor, immigrant vs native, and all the other divisions of our society: