Interstate Highway Types and the History of California's Interstates

Note: The “Interstates Turn 50” series of pages were originally published on the Caltrans website in 2006. They disappeared from the site in June 2019. Knowing that of the goals of this site is to preserve information about the state highway system, and that includes information that was once on the Caltrans website but later disappeared, a friend from Caltrans requested that I explore saving these pages. Luckily, the pages in this series were preserved in the Internet Wayback Machine, and Caltrans has not asked the Internet Archive to take them down. This is because Caltrans is good about giving permission to use photos for nonprofit use. The images here used to be right there on Caltrans' publicly accessible site, and are posted elsewhere around on hobbyist sites. Still, if you wish to use an image, please formally request the image from Caltrans, and indicate you saw it…on the Internet Wayback Machine.

Yolo Causeway: Work was completed on the Yolo Causeway, for the first time allowing year-round travel between the State Capital and San Francisco despite the area’s regular floods. This causeway, which became part of I-80, was California’s first highway project financed by the sale of highway bonds. 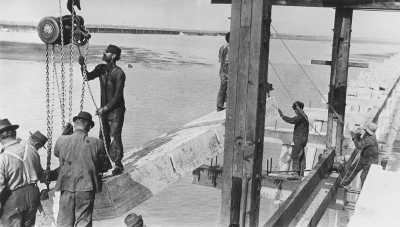 Four-Level Interchange: The Hollywood, Santa Ana, Pasadena, and Harbor freeways were joined by the first four-level direct connector interchange, sometimes referred to as “The Stack.” 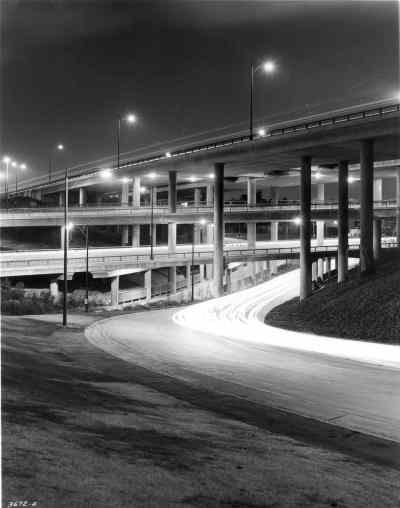 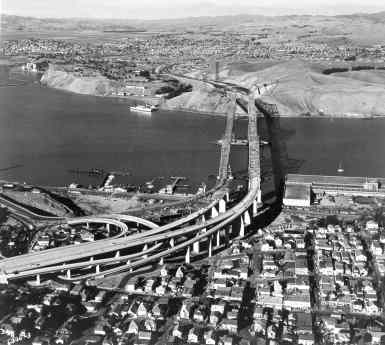 I-80, Carquinez Bridge. Note the expanse of the southern approach.

Westside Freeway (1-5): The 321-miles-long Westside Freeway was the longest freeway project undertaken by the State at that time on entirely new alignment. In addition, due to coordination with the California Aqueduct Project, the project required a close collaboration and development of new engineering technologies with Department of Water Resources and the Federal Bureau of Reclamation. 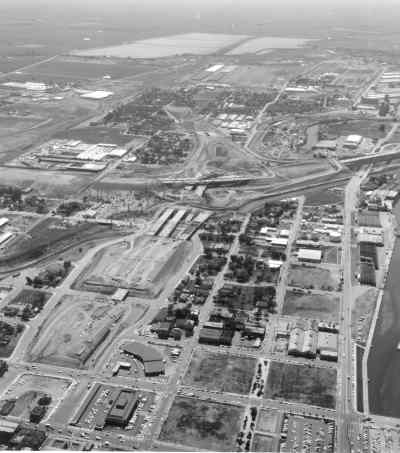 1-10 in San Bernardino and Riverside counties: Between Cabazon and Palm Springs, highway builders used newly developed machinery to put down four lanes of concrete in a single operation, a wider path than had been done before. 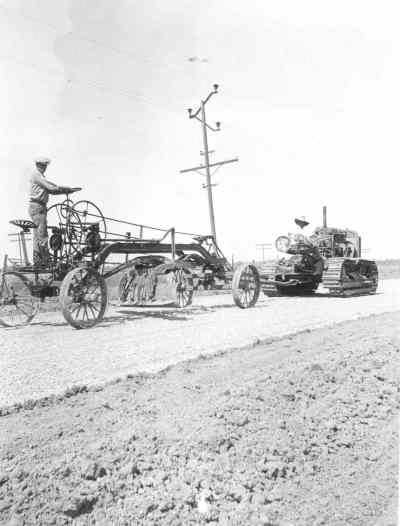 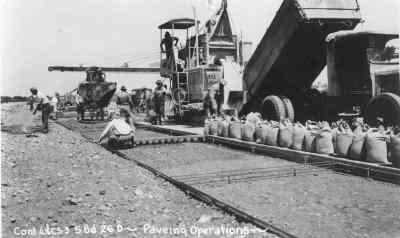 Construction of I-10 in San Bernardino County, 1933. More modern technology led to the replacement of other construction methods, such as the equipment seen here.

Last section of new Ridge Route (1-5): This eight-lane-wide, 43.2-mile-long section of Ridge Route, which traverses the rugged Grapevine and connects the San Joaquin Valley to the Los Angeles Basin, was constructed primarily on new alignment. A unique solution to the problem presented by the terrain was the use of separate alignments for each direction of travel, including the northbound lanes crossing over the southbound lanes.

Sylmar Earthquake: On February 9, 1971, an earthquake rocked the northern San Fernando Valley, near Sylmar, measuring a magnitude of 6.6 on the Richter scale. The Sylmar Earthquake revealed that many common bridge design details were inadequate for a force of this magnitude. The subsequent research and findings triggered a statewide seismic retrofit program, and the significant changes immediately made to California bridge design standards also became the basis for a new national code.

Pine Valley Bridge (I-8, San Diego County): The Pine Valley Bridge was the second and the largest bridge designed for construction utilizing a segmental balanced cantilever method. The bridge carries I-8 over 200 feet high above the floor of the valley. 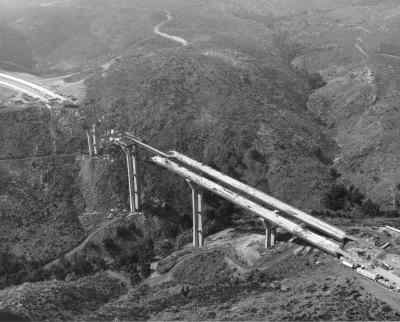 New Dumbarton Bridge: Opened to motorists in December of 1984, the New Dumbarton Bridge connected San Mateo and Alameda Counties and spanned 8,600 feet across the narrowest neck of San Francisco Bay. Approach embankments were constructed with a number of innovative techniques, including paper wick drains and geomembrane reinforcement. In addition, because of the bridge’s location within the San Francisco Bay National Wildlife Refuge, special care had to be taken during construction to avoid environmental disturbance. 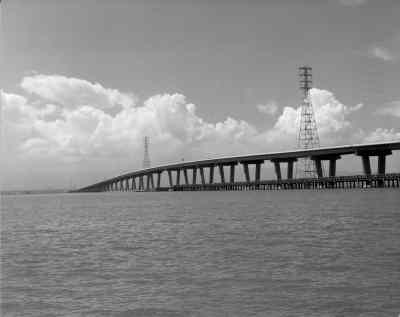 Environmental - “Greening the Fleet”: Caltrans continued to lead the way to cleaner air by using viable, emerging technologies, and by staying ahead of government regulations, in a program called “Greening the Fleet.” This forward-looking initiative began in August of 2000 with a request from Director Jeff Morales to the Caltrans Division of Equipment to lower emissions from the Caltrans mobile fleet. 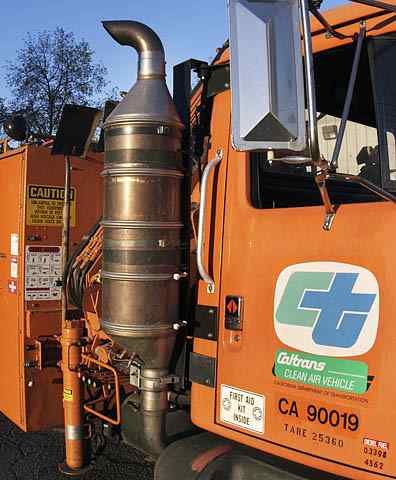 “Bubble-Cushion”: This new technology was designed to protect fish and other wildlife during construction on the Benicia-Martinez Bridge on I-680.

Caltrans continues to lead the way in innovation and seeks persistently to improve transportation. For example, Interstate 80 from San Francisco to the Nevada state line is currently undergoing major renovations and improvements. In the Sacramento area, Caltrans is planning to add 10 miles of carpool (HOV) and auxiliary lanes to I-80 in the median from the Sacramento River Bridge to the Capitol City Freeway split, and an additional five-mile segment of HOV and auxiliary lanes will be constructed from the Sacramento/Placer county line to east of Highway 65. Over the Sierra, the I-80 workhorse is getting a much-needed face-lift from Auburn to the Nevada state line.