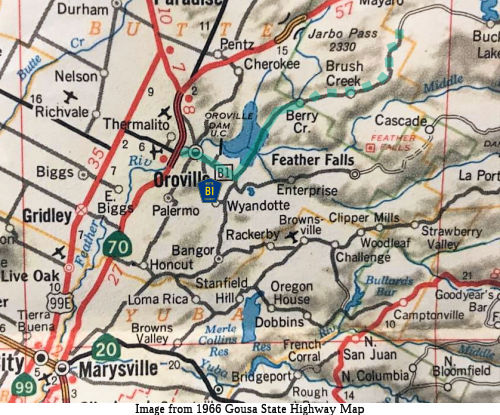 County Sign Route B1 appears to be a county adoption and signage of a portion of former LRN 30. Based on the 1966 Gousha Map, it appears to approximate the route of the Route 162 extension, although it is unclear if the signage covered all of the route in Butte county, or indeed, all of LRN 30 E of Oroville.

The routing that was to be LRN 30 was defined in the 1909 First Bond Issue as running from Oroville to Quincy. This was likely the Oroville-Quincy Highway. In the 1919 Third Bond Issue, the route was abandoned as a state highway and LRN 21 extended to cover the mileage to Quincy. The original LRN 30 appears to have had the following route:
(Source: Gribblenation Blog "California State Route 162 to the Bidwell Bar Bridge (both the 1965 and 1856 variants)")